Standing up to hate and racism 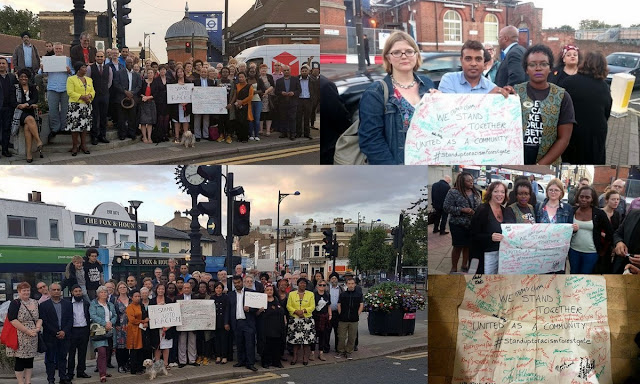 I was very proud on Monday evening to take part in a peaceful protest against hate and racism.

An Asian Labour Party canvasser had been abused, attacked and hit on the head with a bottle the previous day.  This was a completely unprovoked attack. Two men have been arrested and I understand have been charged with racially motivated GBH. A local Police Officer was also apparently kicked in the head during the arrest of those later charged.

The canvasser had been on his way with 3 others to help out Anam Islam, the Labour Party candidate in the Forest Gate North by election, which is being held tomorrow (Thursday 14 July). I do not know if the attacker(s) were aware of the Labour Party connection but suspect this was purely yet another example of post Brexit racism.

Over 50 people turned up to the protest at very short notice including our local MP, Lyn Brown and a number of Newham Councillors. It had been organised by Anam and Forest Gate North Labour Councillors but everybody was welcome and there was a wide range of people turning up to show solidary and give support. Thank you.

Check out Newham Recorder report on this event
Posted by John Gray at Wednesday, July 13, 2016