We need transparency on charges 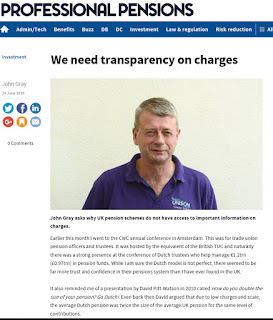 This is my latest opinion article for Professional Pensions magazine.

"John Gray asks why UK pension schemes do not have access to important information on charges.

Earlier this month I went to the CWC annual conference in Amsterdam. This was for trade union pension officers and trustees. It was hosted by the equivalent of the British TUC and naturally there was a strong presence at the conference of Dutch trustees who help manage €1.2trn (£0.97trn) in pension funds.

While I am sure the Dutch model is not perfect, there seemed to be far more trust and confidence in their pensions system than I have ever found in the UK.

It also reminded me of a presentation by David Pitt-Watson in 2010 called "How do you double the size of your pension? Go Dutch!" Even back then David argued that due to low charges and scale, the average Dutch pension was twice the size of the average UK pension for the same level of contributions.

In the UK we are finally beginning to address excessive (and largely hidden) charges and costs in our pension funds. The Bank of England chief economist and even the prime minster have recently attacked the financial services industry for a lack of transparency. Four years ago the Dutch government forced all pension funds to publish its real costs on administration, fund management and transactions. This has allowed funds to benchmark and has driven their costs even lower.

It is argued that in the UK costs are hidden in a complex and secret investment chain and are far higher than presented. Arguably, cost has a bigger impact on long-term performance than picking good active managers.

But when one of the pension funds I sit on in the UK as a trustee (Not LBTH) asked all of our fund managers for the same information on costs that are disclosed in the Netherlands, two of them said they were unable to provide this information.

Why not have this information?

Why is this information freely available to pension fund members in the Netherlands but not in the UK? Why do I not know the true costs of running my scheme? How do I judge if we are getting value for money? How do I know if we are being ripped off or not?

Would you as an individual buy any other product if you did not know what its cost is? Even worse, what would you think of any company if you find out it had 'misled' you on the cost of its product. Remember how angry people were and the financial impact on Volkswagen when it finally admitted it had fiddled its emissions levels.

How can I comply with my fiduciary duty as a trustee if I don't even know such basic bread and butter information? In the United States pension trustees have been sued for such failure.

There now seems to be some momentum. The £27bn Railways pension fund Railpen recently audited its true costs and now believes that it can save the fund a staggering £100m per year.

The Local Government Pension Scheme appears to be adopting the Dutch system. The Association of Member Nominated Trustees voted at their summer conference to work together with the Transparency Task Force to campaign on costs and charges.

This is not about bashing the financial services industry. I don't have a problem as a trustee with paying for good performance. But I do have a problem with not knowing what that performance costs. This lack of transparency must stop. We cannot allow things to continue. We must establish trust and confidence in our pensions. UK Pensions - tell us how much you cost.

(John Gray is a pension board member of the London Borough of Tower Hamlets though he writes here in a personal capacity)
Posted by John Gray at Friday, July 01, 2016