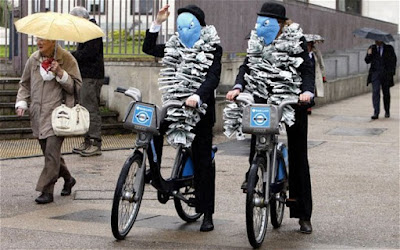 This was the written question I put to the Newham Deputy Mayor and Cabinet member for Finance, Lester Hudson, at the Full Council meeting last week

To the Executive Advisor on Finance, Cllr Lester Hudson

"Last week 3 more employees of Barclays Bank were found guilty in Court of criminally conspiring to rig the Libor interest rate downwards between 2005 and 2008.

This was precisely the same time that Barclays sold £238m of so called “range lobos” loans to Newham Council. The interest repayment cost of these loans goes up if base interest rates and LIBOR go down.

In the light of these and other recent court convictions for conspiracy and fines for interest rate rigging will the Executive member please reconsider his decision not to take legal action against Barclays for fraud and damages and for us to recover the millions of pounds that Barclays and other banks have cheated from Newham residents and stop them cheating them further in the future.

Cllr Hudson responded by saying that the impact of the Libor fraud was relatively minor and that it was too expensive for Newham to take on Barclays Banks by itself but he would be interested in taking part in some collective class action led by the Local Government Association.

I had the right to ask a verbal supplementary question, so I asked why hasn't he taken up the offer given by Cllr Fiaz, who shares my concerns about Banks cheating and robbing residents over LOBO to actually meet some of the experts who think Newham has a legal case against them? Especially since now it seems that there could be a "no win, no fee" deal on offer to get our money back?

He replied that he was suspicious of "no win, no fee" lawyers since there was no such thing as a free lunch.

I argued back "just meet them" for "one hour" and find out!

The Newham Recorder covered the issue here, where I expressed my disappointment at the lack of progress but the pressure group, Debt Resistance, who were also at the meeting think that the Executive have moved their position in favour of "considering" at least some sort of collective class action.

We have to move this issue on. It just makes me sick in the stomach that the Council have had savage cuts in our budget at the same time we have been ripped off by the Banks for millions and millions of pounds. Many of these loans are 70 years long!!!
Posted by John Gray at Wednesday, July 20, 2016