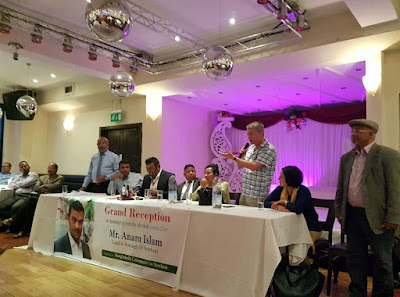 The picture is from the reception held this evening in the Palm Tree, Romford Road to honour the recent election of my good political comrade (and friend) Anam Islam, as a Councillor for Forest Gate North.

I was invited with other Councillors (Cllr Ayesha Chowdhury, Cllr Rokhsana Fiaz OBE, Cllr Julianne Marriott) to speak to the reception and congratulate Anam.

I told the packed reception, how as a Forest Gate resident, I was proud to have a fellow trade unionist with such good politics who wants like me, to bring about change, to be one of my excellent local ward Labour Councillors.

Anam gave a speech thanking his agent, Alan Griffiths, Labour activists from Forest Gate, Newham and Tower Hamlets for his election victory and that he vowed to serve all residents in Forest Gate North and Newham to the very best of his ability.

There was a fantastic atmosphere at the reception with supporters present from different communities and all over East London. It was also really friendly and welcoming. It was obvious to me that people not only liked Anam but were really proud of him becoming a Councillor.
Posted by John Gray at Monday, July 25, 2016