Who is this thug? Manchester City Centre 3.50am Sunday 10 July 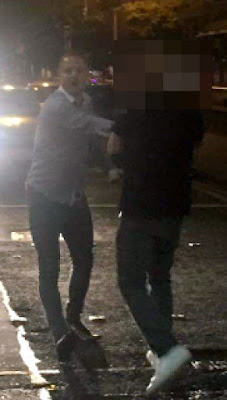 I haven't done this type of thing before on blogger but this yob is wanted by Police to "assist" them in their enquirers following the serious and unprovoked assault on the partner of a friend of mine. This could have been a murder investigation.


"Police have released a photograph of a man they want to speak to after a 28-year-old man was attacked and left with a fractured skull in Manchester City Centre.
At around 3.50am on Sunday 10 July 2016 a 28-year-old man was seriously assaulted on Portland Street outside the Siam Orchid, Manchester City Centre.
The victim was waiting for a taxi when he was head-butted and punched, knocking him unconscious.
The attacker then fled along Sackville Street towards Bloom Street with another man.
The man was left with multiple injuries including a fractured eye socket, a bleed on the brain and a fractured skull, which he received hospital treatment for.
Police have released a photograph of a man they want to speak to.
Detective Constable Phil Bainbridge of GMP’s City of Manchester team, said: “The attacker is clearly a violent and aggressive individual who knowingly left a man in a serious condition after he had attacked him in the middle of a busy street.
“I am appealing for the man in the photograph to come forward, and anyone who recognises him to contact police as they may have vital information that could help our investigation.”
Anyone with information should contact police on 0161 856 1398 quoting 123846J/16 or the independent charity Crimestoppers, anonymously, on 0800 555 111.
Posted by John Gray at Saturday, July 16, 2016