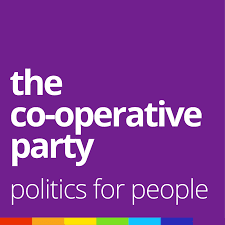 Back this evening from a rerun of the Newham Co-operative Party AGM. Due to "irregularities" at the AGM in January the AGM was rerun with Co-op Party officials chairing the meeting.

I was really pleased that longstanding Co-op Party stalwart, Gill Hay, was elected Chair. The Vice Chair was won by Jeanette Dye from East Ham. Neil Wilson was elected unopposed as secretary and Averil Dohohoe as Treasurer.

Alan Griffiths who has done so much for the Co-op Party and turned our branch into the second biggest in the Country was re-elected as Membership secretary. I was elected unopposed as assistant secretary as was the auditors.

I was also elected unopposed with 3 others to the Co-op London Regional Council.

The Co-op delegates to East Ham and West Ham Labour Party General Committees will be decided later by a preference count of votes cast last night.

The evening was marred by the abusive and threatening behavior outside the meeting by one Co-op member towards another, which I will be bringing to the attention of Party officials. Such behaviours are not acceptable in the Co-op Party or any other progressive organisation.
Posted by John Gray at Monday, July 18, 2016