Why Nationwide Building Society has some pretty rubbish governance 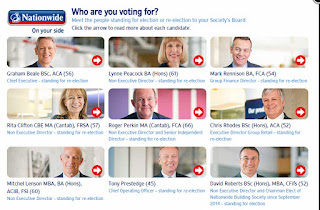 I spent today recovering from UNISON conference and trying to catch up on my post and emails.

I was completely ticked off when I responded to the ballot papers I had received while away for the Nationwide AGM next month. This is the biggest mutually owned building society in the world with some 14 million members.

The candidates for election or re-election to its Board appear to be entirely white, but only 2 of them are women. There are no employee or member representatives on the Board and as far as I can see in a move reminiscent of North Korea, only "approved" candidates had been allowed to stand and fill positions. I pointed out on the Nationwide AGM survey and twitter that they appear to have "a white middle class mates club" running this hugely important mutually owned organisation,

There appears to be 13 directors on the Board but only photos of 11 on the website. So I am unclear about the diversity of the entire Board.

Elsewhere in the annual report they claim that they expect by July 2015 to have 25% of women on Board and "33% of the entire director population (divisional directors and above) to be female and 8–15% of the entire director population to be Black Asian Minority Ethnic (BAME) by 2020".  Which until they explain more about divisional directors is entirely meaningless and would I think suggest that they can fulfill their target on "BAME" by only including less senior staff.

This is just shocking and really disappointing. I have been a member of the Nationwide since a child. I hope that other members will like me vote against the annual report and the proposed directors (I withheld my vote on the female candidates).

What a mess the mutual movement is in when even the Nationwide acts as badly as their private sector counterparts.

Update: A member of the Building Societies Members Associations has pointed out that they have an article on their website here on Nationwide.
Posted by John Gray at Saturday, June 20, 2015