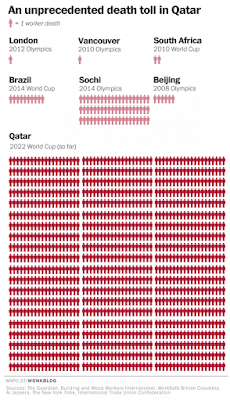 Shocking chart and story from Washington Post. Hat tip TUC Risks. People quite rightly go on about the corruption and money but what about this waste of human life? Support the TUC "Play fair" campaign.

"The Washington Post has flipped the focus from the financial corruption gripping football’s global governing body, instead highlighting concerns about the considerable and deadly human price paid as a result of FIFA’s failings.

“In the end, it only took a $150 million scandal to make Americans care about soccer,” the paper notes. “FIFA, the notoriously corrupt and yet seemingly invincible governing body of world soccer, has finally landed itself an indictment that some would say is worthy of its reputation.

The charges against a handful of senior FIFA officials include money laundering, racketeering, bribery and fraud. In short, the federal lawsuit alleges what millions of soccer fans have suspected all along: that FIFA officials have been using the organisation's massive influence to line their pocketbooks.”

But the Washington Post adds “a closer look suggests that there is a lot of real-world suffering happening as a direct result of FIFA's decisions. For the most obvious example of this, look to Qatar… a report by the International Trade Union Confederation has estimated 1,200 deaths so far, with up to 4,000 additional worker deaths by 2022.”

Commenting on the corruption charges laid by the US Justice Department against several FIFA officials, the paper notes “as the families of 1,200 dead workers can attest, in many ways the damage has already been done. If FIFA board members did indeed accept bribes from Qatar to let it host the 2022 cup, it would show how backroom corruption can have widespread and fatal consequences.”
Posted by John Gray at Sunday, June 07, 2015