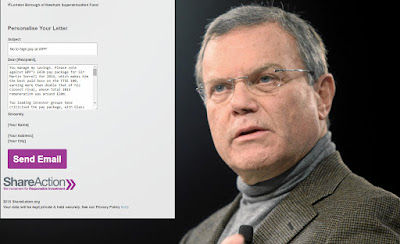 "Dear John, the FTSE fat cats are at it again. Advertising and marketing company WPP wants to pay its boss, Sir Martin Sorrell, £43m this year. That’s 2378 times what you'd earn on the London Living Wage.


Last November, you emailed your pension fund about a high pay deal at BG Group - and it worked. [2] The company received a barrage of opposition from shareholders, including pension funds, and the pay deal was cut. Your voice had a real impact. It's time to do it again.

Take two minutes to make sure your pension fund votes NO to £43m a year at WPP on Tuesday.

At WPP's annual general meeting on Tuesday, shareholders including our pension funds will be asked to vote to approve the pay deal. As savers, we have an opportunity to make sure shareholders vote no to this excessive pay package.

This deal is seen as very high even within the industry. One group, Glass Lewis, has recommended that shareholders vote against the "wholly excessive" pay deal. However another group, ISS, has said shareholders should vote in favour despite labelling the pay deal "exceptionally high." [1]

Tell your pension fund to vote NO using this quick and easy tool.

With the industry divided, it's more important than ever that pension funds hear from their customers on this issue. Let's make sure WPP knows that it can't get away with spending shareholders' money on such excessive high pay.

Colette, Matt, Grace and the rest of the team at ShareAction.