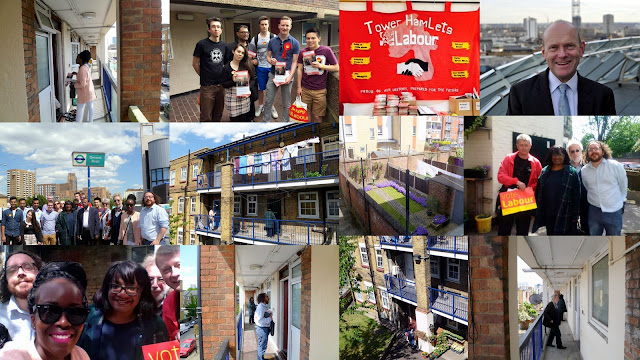 Picture collage from this afternoon's canvass and leaflet in Devons Road, Tower Hamlets. I was given a board to run and went with a team of West Hammers, which was joined by Diane Abbot MP and the shy and retiring Bill Turner, formerly from Tower Hamlets and now Barking and Dagenham.

It was an energetic round, up and down mainly non lifted housing blocks. Diane was recognised by residents who couldn't believe that someone from the telly was standing outside their front door!

I enjoyed listening to Newham's youngest Councillor, Seyi Akiwowo, tell off a young man who said he wouldn't vote for any politician "because they were all corrupt". She said she was a politician and she certainly wasn't corrupt!

The response from voters for John Biggs was pretty good but there was isolated allegations and counter allegations of dirty tricks, none of which could be substantiated.  I think overall there is a feeling that Tower Hamlets needs some stability and although some still have reservations about what has happened, many think John Biggs would be a good Mayor and make a new start for the borough.

Afterwards, many of went to the Galanisers Union pub in Bromley By Bow and proceeded to put the whole world to rights.

Tomorrow, (Sunday) Sadiq Khan MP, will be outside Crossharbour DLR in the Isle of Dogs at 2pm.
Posted by John Gray at Saturday, June 06, 2015