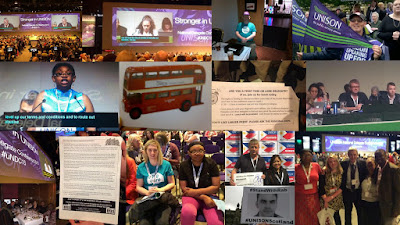 It's now been over a week since the end of UNISON National Delegate Conference (NDC)  in Glasgow and I have just about recovered from the traditional post conference lergy.

This is what happens after being locked up for 4 days in what is really a very large shed, with dodgy air conditioning and thousands of other people.

NDC is one of the largest trade union events in the world. It was announced at conference that there was over 3000 delegates and visitors. The largest number ever registered which is interesting considering the challenges that unions, especially in the public sector face.

There are my personal views and reflections of what I actually think was one of the most successful UNISON conferences I have been to even though of course I have just a few little moans.

Two of our delegates managed to speak during conference and the other two tried a number of times but were knocked out by other delegates moving points of order to push conference business on. Most UNISON branches do not send any motions to conferences nor do they have any delegates speaking. So our branch still did well to represent the views of our rank and file members but we need to think again how we arrange speakers in conference to try and make sure that important debates are not closed down too early simply because some activists want their pet motions to be heard.

I admit to be a conference junkie and enjoyed reading all the flyers and the newsletters and listening to all the debates, even to those who try to explain how the revolution and a land of milk and honey is just around the corner, if only we demanded a "general strike". If only it was so simple.

There was also some amusing calls for unity by those who then went on to attack the unions lay leadership, our national officers, the Labour Party and uncle Tom Cobley.

Others appear to not realise that Labour has been out of Government since 2010 and that the Tories were actually re-elected in May for another 5 years.

Instead of complaining constantly that the Labour Party is not going to be the 5th International, we should be making sure that our members are supported and encouraged to further our union aims and values within our own political wing.

The vast majority of speakers and debates were fantastic and UNISON should be very proud of its delegates and their informed, intelligent and often witty contributions about the great issues of the day.

There is a genuine debate to be had about the future direction of the union and how we support and protect our members and strive for change. I feel confident that we can win battles if we choose carefully and don't seek out cliffs to march over in search of more "glorious defeats".

Our General Secretary, Dave Prentis, made it clear that we were prepared to take on the Government. We survived 2010 and we will survive 2015. He promised to increase number of stewards, treble the number of fighting fund organisers, double our legal funds and take a national lead in campaigning and protest.

We also had fantastic international speakers and fringe events.  Brilliant stalls and exhibitions in the UNISON zone. We even had our own demo and lobby outside Glasgow City Hall in support of sacked SECC UNISON steward Robert O'Donnell and striking Glasgow Homeless caseworkers.

I chaired a fringe on the Local Government Pension Scheme and spoke twice as a NEC member. Firstly to move the composite on Pensions on their behalf and then in support of the re-prioritised composite on Housing. Both composites had motions from my branch incorporated in them. Last year none of the motions I was going to speak upon came up so I did not speak. Such is life.

I thought my fellow NEC trustee on the UNISON staff pension fund, Lucia McKee, was one of our great lay Presidents and chair of conference. Lucia was fair minded but took no nonsense and was a good humoured but to the point champion of conference. I am a cynic about some things at times but am so proud that UNISON continues to grow its activists and show time and time again that genuine working class women and men can prove to be great leaders of our union.

At the end of conference the new NEC met for the first time and we elected our President for the year, former school meals cook and long time Labour Councillor, Wendy Nichols. London Ambulance Service Branch secretary, Eric Roberts, is now the senior Vice President and West Mids, Carol Sewell, was also elected as the new Vice President.

I eventually got home in London just before midnight and have spent the last week since largely coughing and spluttering with conference lergy.
Posted by John Gray at Sunday, June 28, 2015