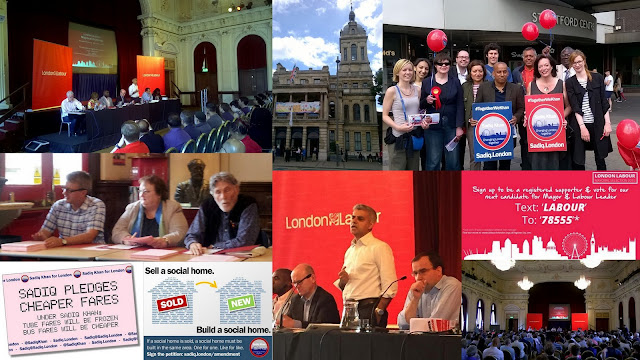 This afternoon there was a London Labour Party Mayoral candidate hustings at the historic Old Town Hall in Stratford, East London

West Ham MP, Lyn Brown, local Councillors and other Party supporters held a stall outside on behalf of candidate, Sadiq Khan and encouraged local Labour voters to sign up and become "Party Supporters" for only £3.

I had volunteered with local West Ham CLP members to help out with the registration of people at the door coming to the event (and sell them raffle tickets - see picture of the dynamic trio with back drop of Keir Hardie statute, who was elected as the first ever Labour MP in this same town hall in 1892).

Since I was on the door I missed the beginning of the hustings and then left to go back after 30 minutes. My initial thoughts were that the panel all looked a little nervous and very serious.

Diane Abbot spoke first and said she should be the candidate since due to her TV and media work people all over London know her and unlike former ministers, she also has the personality to win a London Mayoral election.

Gareth Thomas said he was the only outer London Labour politician standing, who also knows how to fight these marginal seats and how to win for Labour in outer London. He is a street fighter while his opponents all come from safe inner London seats.

Sadiq Khan said he wanted to be someone who having been born and bred in a London council estate and was the son of a London bus driver, wants to be the candidate who will represents all of London.

David Lammy made clear that he wanted be the young, active and independent of party candidate who could defeat Zac Goldsmith.

Tessa Jowell  compared herself to Hillary Clinton, and pointed out that if she win, she will be the youngest ever female mayor of London (think about it).

After 30 minutes I went back to the front door to let another member of the registration team go and listen. I understand things got a little heated later on with questions about building on the Green belt, the number of social housing homes in the Olympic Park and the relaxation of gambling laws.

Talking to people as they left it seemed that they did learn from and enjoy this event.