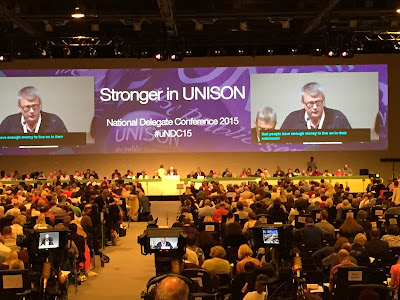 Conference, A decent and safe pension in retirement is vital to ensure people are able to live with dignity into their old age.

This motion highlights some of the current pension pitfalls and dangers you face and what we have to do to make sure people have enough money to live on, in their retirement.

The first danger area is the new so called “right” to cash in your pension pot.

Pensions were hard fought for in this country and successive governments rewarded employers and workers who saved into a pension with significant tax breaks - this is because saving for retirement rather than spending now, is often a hard choice - especially when making ends meet is hard enough day by day.

Until the recent Tory changes, you could not have more than 25% of your pension in a lump sum, since its main purpose is to save for security in retirement.

But now, under new legislation, from April this year, anyone over 55 can convert up to 100% of their pensions into cash.

Sounds tempting doesn’t it? But Conference there are a series of traps designed to rob you and your family of security in retirement. UNISON is deeply concerned about this development.

One of the first questions we have to ask is who really benefits?

Well certainly the government, as it will be able to get much more tax revenue from a one-off lump sum – up to a whopping 75 per cent of the pension pot could be taxable and much of that could be at the higher tax rate. A nice little earner for the George Osborne certainly.

This so called “pension freedom” to be robbed applies to what is called defined contribution schemes - which an increasing number of our members are in - BUT the majority of our members, who are in defined benefit schemes such as the LGPS could also withdraw their money from their current scheme and transfer it into an inferior and insecure scheme just to access this new ability to cash it in.

This would mean exchanging a state guaranteed, inflation proofed income and all associated benefits (such as life assurance, ill health and dependants pension) for a taxable insecure lump sum - swapping security for insecurity in retirement. For the vast majority of people this is a bad deal.

But the dangers don’t stop there.

Research suggests there may be real pressure for people to sacrifice their security for others. There is the real risk of vulnerable pensioners being coerced into cashing in their pension pots for someone else’s financial gain or greed

Let us also make no mistake that Pension scammers and fraudsters are jumping up and down with joy at this new measure – the unwary will find their pension has been reduced by extortionate one off charges, annual fees and that their money is now tied up abroad or lost entirely to a scam.

And we can’t ignore that our funded occupational schemes are also themselves put at risk by this policy.

A well managed pension fund runs on the basis of expected cash in to cash out ratios. If a new wave of pensioners start cashing in their pensions then, in the short-term this will cause a significant cash flow risk to the schemes.

The government absolutely knows the risks involved which is why it has made it mandatory for independent financial advice to be taken before cashing your pension pot in; but a telephone advice line will not stop people being seduced into choices that later prove completely disastrous.

So what about the state pension and state backed auto-enrolment schemes - can we rely on them?

Research shows that the UK has one of the least adequate pensions in the whole of the EU.

17 European countries do better than us in terms of the overall risk of pensioner poverty including Romania, Latvia and Slovakia.

It is clear that, as a minimum, the rate of state pension should be no less than the official level of poverty.

Auto enrolment is a welcome step forward in encouraging employers and workers to save towards their retirement but while the minimum employer rate of contribution remains so low it will not do nearly enough to guarantee an adequate retirement income.

That is why, as the motion sets out, we must work with the all relevant bodies to campaign for an urgent increase in minimum employer contributions, combined with a state pension at least equal to the official poverty level of £175 per week, and why we must organise a member information campaign explaining the dangers of the new rights to be robbed