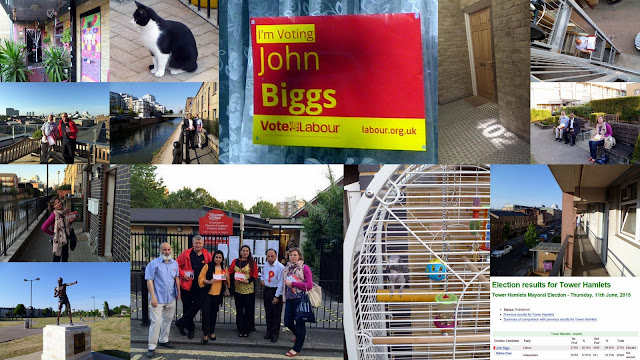 Great news. Woke up this morning to find out that John Biggs is the new Executive Mayor of Tower Hamlets.

Yesterday evening West Hammers were out with at least 3 teams "on the knocker" reminding supporters to vote in Lansbury ward. My team was in and around the Bloomfield Estate by the Limehouse Cut. The canvass was positive for Labour but there was clearly a large vote for the "independent" candidate, Rabina Khan. An usually large number of people who had voted declined to confirm who they had voted for - which is always a worry.

I had been cautiously optimistic during the campaign since local Labour activists I had spoken to had been on the whole, reasonably confident. Sometimes in the past they tend to be a bit of a misery (mind you usually with some cause).

The canvass tonight was pretty good humoured, energetic (lots of non lifted housing blocks to climb up and down) and included a brief fuel stop for chips. There was a mixture of well kept social housing and new private gated blocks. In one very expensive warehouse conversion we got into the flat door numbers were beamed down onto the floor (see top right of collage).

Finished off with drink (and obligatory sausage roll) at Galanisers Union in Bromley-By-Bow.

It will be interesting to see who will replace John Biggs as our local Greater London Assembly member (his current job).

Labour also won the Council by election in Stepney Green  and Sabina Akhtar was elected. Congratulations to John, Sabina and Tower Hamlets Labour Party for a magnificent victory.