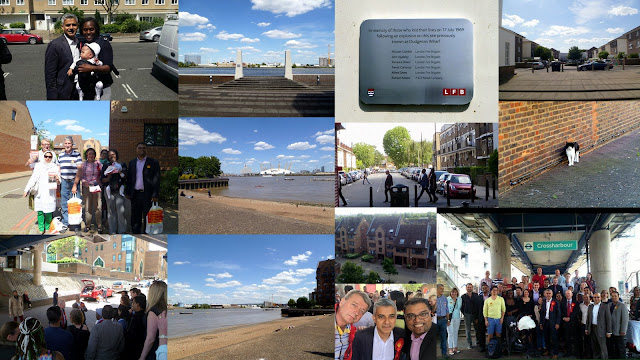 This afternoon we meet up outside Crossharbour station in the Isle of Dogs. It was a large turnout from all over London. Sadiq and John said a few words to rally the troops then we were sent off to various parts of the Island, mostly to deliver leaflets.

West Ham Labour Party Chair (and Stratford Councillor) Charlene Mclean led our team, ably assisted by our very own West Hammer Young Pioneer, Esme. We leafleted the east side of Manchester Road, in between the Samdu Estate and the Police Station alongside the River Thames. The weather was lovely and warm and we were quite envious of those who were sitting on the "beach" enjoying the rays.

Then I came across a plaque in Dudgeons Wharf remembering 5 fire fighters and another worker who were killed by an explosion while tackling a fire on this site in 1969. It was the worst single loss of life in the London Fire Brigade since the 2nd World War. One of our team, East Hammer Malcolm, used to be member of the now disbanded London Salvage Corps which was once part of the London fire office.

Afterwards we stopped off at the The George Pub (opened 1864) and as yesterday proceeded to once again put the world to rights.

Election day is this Thursday 11 June so if you can come and support John Biggs as Labour Mayor on the day please do and check out http://www.johnbiggsformayor.com/events.
Posted by John Gray at Sunday, June 07, 2015