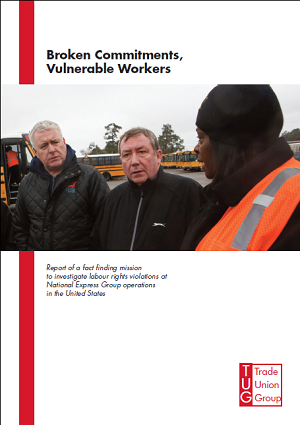 Find out below what happened when two British MPs were invited by low paid and exploited workers to find out how they were treated by their British owned employers.

On May 6 it will the National Express AGM. If you have a funded pension or insurance policy contact your administrators and urge them to make sure that their fund manager supports resolution 22.

"Ian Lavery and Jim Sheridan went on a fact-finding mission to to investigate labour rights violations at National Express Group operations in the United States.

While we went to Charleston, South Carolina and Memphis, Tennessee we also spoke with Durham workers from Jacksonville and Santa Rosa County, Florida; Grey’s Lake, Illinois; and Albuquerque, New Mexico.

Based on our investigation we produced a report and also set forth recommendations to address the deep concerns we have with Durham School Services.
Click here to download a copy of the full report."