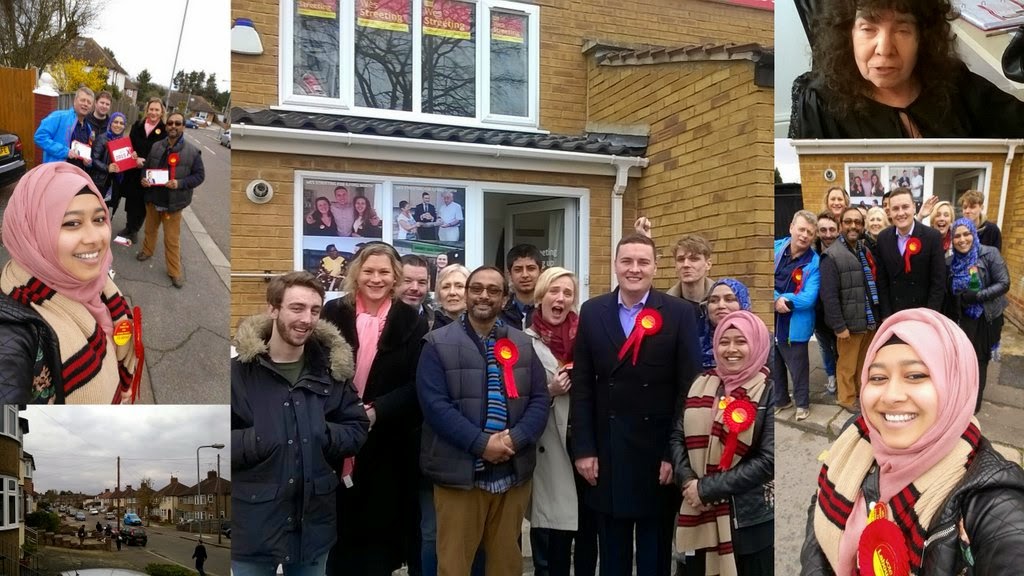 Picture collage is from this afternoon's campaigning for Wes Streeting as the future Labour MP for Ilford North.

We had 5 West Hammers (and 1 East Hammer) with us while Walhamstow PPC, Stella Creasy, was also there with her local activists to support Wes.

All the Hammers went off as one canvass team, ably led by Aisha Siddiqah.


I knocked on one door and a man wearing work overalls opened it. He took one look at me and rolled his eyes and shook his head. I said that I obviously hadn't made his day by knocking at his door this afternoon. He said no, he was just tired, since he had been up since 3am that morning for work as a lorry driver. He admitted he was also a life long Conservative voter. We had a brief chat about work (I used to have a Class 1 HGV driving licence) and I left him to have his well deserved sleep.

Soon afterwards I knocked at another door and a young women answered and she seemed really pleased and interested to see me and listen to what I had to say (unfortunately, this is not a common response I must admit. Even when I was much younger).

I explained to her how important this election and how we must get Wes elected. She said that she had never voted before but did intend to vote this time. She looked quite young and I wasn't even sure she was over 18, so I asked how old she was? She said 26. I asked why she had never voted beforehand and she said that she didn't really know but she will definitely, definitely vote this time.

Back at Ilford North HQ I met up with top Musicians union activist and Redbridge Councillor, Barbara White (see top right of collage).

We actually had a good door knock session and identified many Labour supporters in quite a Tory ward.

According to YouGov the result in Ilford North is "too close to call". It is absolutely imperative that Labour supporters move out of their local comfort zones and if they live in secure Labour seats then they must go and support our candidates in marginal seats such as Ilford North.

If we win in the marginals we will form a Labour Government on May 8th. If we don't win the marginals, then Labour will be in opposition again and our MPs will have little or no power to champion and protect their constituents. QED