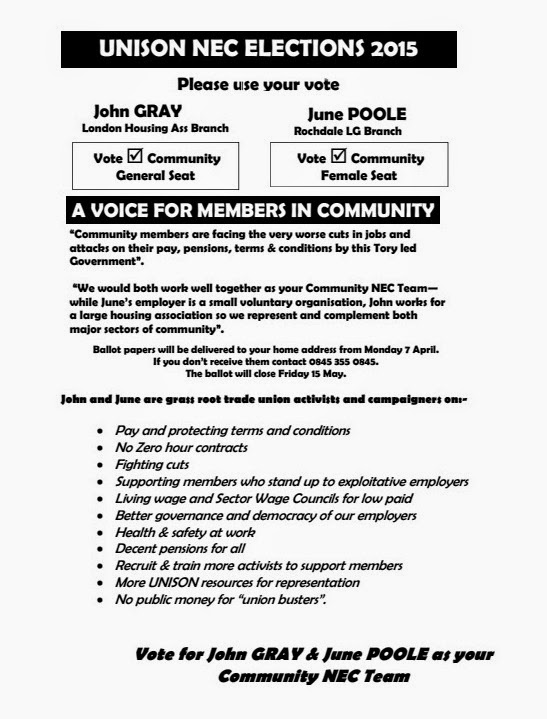 Tomorrow (April 7) ballot papers should be starting to drop though the home letter boxes of 1.3 million UNISON members up and down the country.

Every 2 years all members of the UNISON National Executive Committee (NEC) are up for re-election. The UNISON website describes the work of the NEC as "Between conferences, an elected national executive council (NEC) decides on issues and campaigns, oversees the running of the union and works with UNISON staff to support members. NEC members represent UNISON to the wider world".

UNISON members will be able to vote for Service Group, Regional, Black, Female and Low paid committee members. If you are under 27 you can also vote for a Young member to represent you on the NEC.

I am standing for re-election as one of the two Community (General seat) NEC members. Community is the Service Group in UNISON for members who work in Housing Associations and the Voluntary Sector. June Poole is standing as well for the other Community (Female seat). June and I have worked together well in the past and are on a "joint ticket".

I will be posting recommendations about candidates who are standing for other NEC seats. This is in my personal capacity. Check out UNISON NEC 2015 Blog and Facebook page.

These elections are really important to the future of UNISON and I hope that there will be a good turn out of members who will vote and decide upon the leadership of the union for the next 2 years.
Posted by John Gray at Monday, April 06, 2015