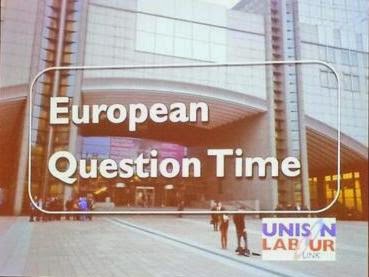 I am still catching up on posts from the UNISON National Labour Link Forum earlier this month.

After the Westminster debate with local MPs there was the "European Question Time" with MEP's Clare Moody, Anneliess Doods and Richard Howitt, who are all proud UNISON members.

At the beginning, London delegate Sanchia Alaisa was thanked by the Chair for her very credible performance standing as a MEP in London but who was not this time elected. .

Richard thought that despite the negative media coverage,  Labour actually had overall a fairly successful European result in May. There was a 50% increase in the Labour vote and we beat the Tories for the first time ever in a EU election. The BNP was wiped out but there are around 150 hard right MEPs in the EU Parliament and the Tories have joined a hard right grouping with parties who have MEPs with race hate convictions.

The MEPs at forum were also proud to be on the picket lines and rallies for Thursday strike over low pay. They understand why UK MPs may not feel able to do the same.

Claire spoke about how in the South West last time it was the only region not to have a Labour MEP. This time they nearly got 3. She believes that Ukip have poisoned the political well with their policies. She walked out of the EU Parliament when Farage spoke his nonsense.

Annilease talked about her campaign about agency staff in hospitals who had buy own shoes, didn't have secure employment contracts and were offered corridors to sleep in. We have seen a polarisation in politics and a "public v private" debate with the public sector being blamed for recession.

Young people and those on benefits are being demonised as well as the demonisation of migrants. There is a "Normalisation of racism". We need to challenge myths and the nonsense about "benefit tourism".

Final thought was about strong support for Social Europe.  Stop the race to bottom via Europe. Need growth and jobs but quality jobs and decent lives.

In the Q&A in response to a question on what would happen if there was an independent Scotland Richard thought that Spain would block Scotland joining the EU because they have got their own secession problems as does Belgium. Every member state can veto a new member joining as France did with the UK for many years. Also if it did become a new member of the EU it will under existing treaty have to join the EuroZone.
Posted by John Gray at Tuesday, July 29, 2014