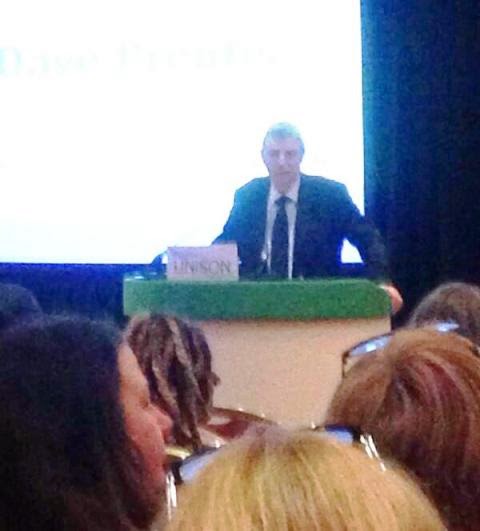 Our UNISON General Secretary Dave Prentis spoke next after Jon Cruddas MP at Labour Link National Forum. He started by explaining how moved he was to have been last night at an UNISON event to honour activists who had helped the ANC to defeat the Apartheid regime in South Africa. .

He also also thanked long serving UNISON Labour Link officer, Joyce Kay, who is retiring this year so this will be her last National Forum.

Dave reminded us about the 250,000 local government workers who are on the  national minimum wage and the 1 million who earn less than a living wage. The Day of Action on the NHS and the Local Government Strike on 10th July is just the start. In August there a ballot by food safety members and after that the NHS. Its time that we stand up for our class, our people.

Dave Cameron's "Big society" has turned into a bigoted society. We are a world leader in zero hour contracts. Our Councils have lost £20 billion in funding. Just pointing at the failures of the Tories will not get people to vote Labour or even get them to vote. Our Party needs to have a vision of a modern welfare state run on a not for profit basis.. We want these issues cleared up. What we want is a Labour Party committed to tackle child and pensioner poverty. We want a Party committed to build an NHS that Nye Bevan would be proud of. We do not want Labour Councils just being vehicles for putting out contracts.

Labour should have no unfunded spending commitments. But Spending and Income are two parts of the equation. Bankers should pay little more. So should the rich who are bleeding our society dry due to tax evasion. Let us have a real wealth tax. Claw back some of the great wealth of the top 1%.

The rise of UKIP is a damning indictment of the main political parties. we took on the BNP before and sent them packing.  We will do the same to UKIP. We will say what others will not say - that UKIP is a racist party and its policies are racist.

In past Labour has been taken in about business. We need and now must get alternative policies not alternative spelling. We expect Labour to support us over Pay. Opposition means opposing and supporting us. We want no weasel words. We want our demands to be heard. We want clear commitments.

It is great news that the Health & Social Care Act will be repealed by Labour. We cannot further privatise the NHS. We know that we have to win the next General Election. The Tory plan is clearly to pillar Ed Miliband. He has done some silly things such as pose with "the Sun" newspaper. We know things are difficult but we have got to have clear commitments about what Labour stands for it. We not a union that makes a fuss about affiliations, we are a union that pay our dues.

Cameron and Tories do not stand for our class. We must get rid of them. Our one objective is to kick the Tories out and get a Labour Government elected not just 5 years but 15 years.

(Co-coincidently during the break I got a voice mail message from my branch office in London who said former UNISON General secretary Rodney Bickerstaff had just popped in to say "hello". I assume he was speaking at an event in the building that we rent an office. Shame I missed him).