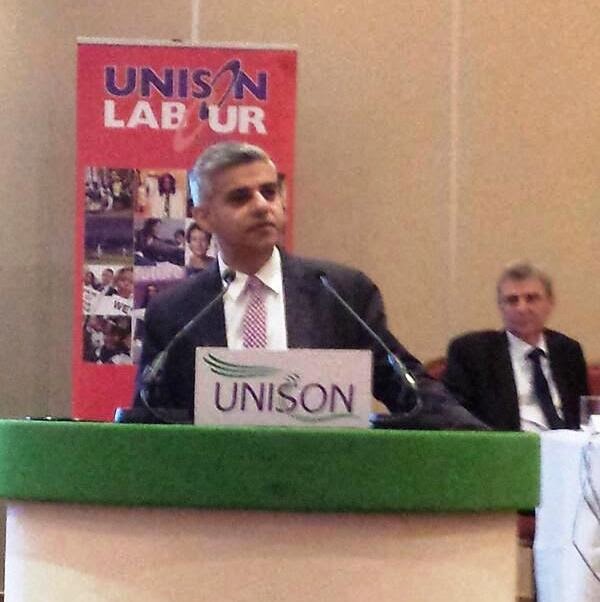 The keynote speaker to the National Forum was Shadow Secretary of State for Justice and Minister for London Sadiq Khan MP.

Sadiq started off with a joke pretending he was a delegate from London region moving a motion at this forum then stated that there was no danger of the press trying to misinterpret his speech, since it will be published in full afterwards (another reference to the recent problem that Jon Cruddas MP experienced).

He introduced himself as the son of a bus driver, whose sister is a teacher and brother works in the NHS. He salutes our public services. Public institutions hold our society together.

Eleanor, (the Chair of Labour Link - Eleanor Smith) as a theatre nurse knows that the NHS is having now a summer crisis never mind a winter crisis. This shows you can never trust the Tories with the NHS.

Sadiq asked how many of us were Councillors? A number of us put our hands up. He thanked all Councillors for their hard work and pointed out that unless things change Councils will soon have to close all but statutory services.

The huge new fees on Employment tribunal applications is depriving rank and file workers justice. Cameron claims to champion the rule of law. Sadiq argued we must stand firm on further attacks on access to justice.

The Tories simply fail to understand public services and this is just as damaging as cuts. There is no accountability as you can see from the privatisation of the Probation Service. The next Labour Government will face massive debts but Labour and Ed Miliband are up for it.  The attack by Ed on Murdock and the Energy companies shows this. The Tories however attack the player and not the ball. Remember what happened in 1992 and expect further personal attacks on Ed.

He praised Ed's plan to devolve power and money away from the centre and empower our great cities and councillors. Sadiq promised not to sign any contract to privatisation which are on his desk as Justice Minster in 2015 and his first task will be how to unpick existing contracts.

He looks forward to working with us to kick out the Tories and the Lib Dems in the next 10 months. UKIP in the recent London elections went from being 20 out of 2000 Councillors to only 12.  We must tell people that UKIP leaders pledge that they want to keep alive the spirit of Thatcherism. They want to privatise the NHS. Get rid of maternity rights.

Labour elects Councillors that reflect the community.  We went from control of 15 to 20 London councils. We even won the Tory flagship Council of Hammersmith and Fulham on a "Save our NHS" campaign.

During the Q&A Sadiq said we ask tough questions at UNISON conferences. "I knew I should have gone to Unite". (a joke) In a question about how to combat Islamic extremism Sadiq pointed out that there are only tiny number of extremists out of the 3 million UK Muslims. Muslim values of respect, faith, family and working hard are the same as traditional British values.  The people he breaks bread with to end his fast have nothing to do with those who go to fight for ISIS and we shouldn't tarnish all Muslims with the same brush.