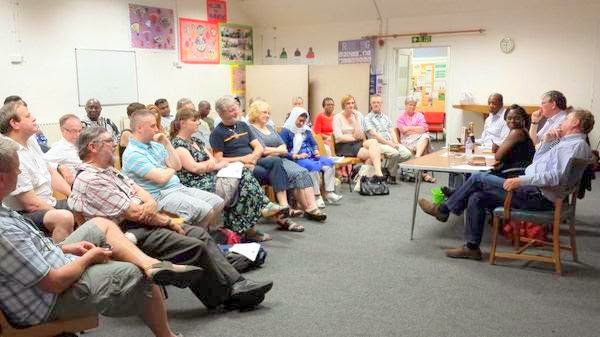 On Thursday we had Professor Ken Spours as our guest speaker for our West Ham CLP General Committee meeting which was open to all members.

After his presentation we had a community Iftar (breaking of the fast during Ramadan) event which I will post upon next.


Due to a work commitment I came in a little late but as I came in I heard Ken extolling the education system found in the "Nordic arc of prosperity" as well as parts of Canada. He wants to reverse some of the extreme Anglo Saxon education models such as the "Grove Revolution" in the UK.  Michael Gove's privatisation has led to one of the most centralised and politicised education systems in the world.

The emphasis on early assessment leads to young people being labelled and not assessed. Ken gave an example of a bright 6 year son of one of his neighbours whose assessment report was next to useless but labelled him as below average with no real evidence.

Ken admitted that he use to be a member of the Communist Party for many years, mind you, he was  "a Euro-communist not a Stalinist".

Ken believes that you must always accentuate the positive. We need a climbing frame concept of eduction. Educators should not lead from the front or be behind but by their students side. Help people to discover their own talents. This "helping hand" approach he first found in Tanzania.

Unemployment may be going down from a very high level but the young are losing out and are now the new poor. We need inter-generational justice. The Tories prefer inter-generational war. He would prefer class war. But not a Marxist class war (despite still being a Marxist).

As well as a New Education system we need a new type of economy and politics. In one way he liked Gove more than Ed Balls. When Balls was the Secretary of State for Education it was the "peace of the grave yard" and there was no debate. The mass raving debates on education under Grove is much better.

Labour did many good things but Labour cannot just tell teachers what to do. Tristram Hunt MP gets this bottom up approach. We need new values.  Education is too important to be left to politicians. We need an independent Council for Education. Other countries plan ahead for 10 years rather than our 3 year political cycles.

Education should not humiliate kids at schools and should stop damaging them. The future is about being creative. Ken sees top Chinese students at his university who fall apart when asked to work by themselves. Values are the glue of system. The more people understand what to do the less we have to tell them.

He once had to sit next at a dinner to Gove and listen to him say that the most important thing a young person should know is facts such as "where is Belgian?". While Ken accepts that young people have to know certain things. You really need to put them in different and difficult circumstances and not just enter them for a 12th GCSE. What is the use? We live in a problem world not a subject world.

We need a baccalaureate system and hopefully we will have one soon . Students will have to undertake a research project as well as voluntary work.

Ken believed that the Tory attitudes over the schools in Birmingham which are claimed to face an Islamic takeover is hypocritical since they had removed the powers of local authorities to properly  supervise schools.

Schools are not an island. We need more confident teachers. We now recruit probably the best we ever had. But they tend to be technically good but cultural poor. The current system gives them the incentive to cheat. All teachers should take a Hippocratic oath. To do no harm but fight for better education. Get a discussion of values and why they are here.

Finally, Education must fully integrated communities. It use to be said that school is bad but better than work. We need to have confident workers who have control. A hall mark of a fully comprehensive system is true life long learning. If we get this then we can have our 1948 moment.

In the Q&A there were many questions. In mine I said that I agreed with much of what he said but felt there was a danger of romanticising comprehensive schools. I went to a former secondary modern turned comprehensive in the late 1970s. While there was a handful of excellent and dedicated teachers who helped me, for many working class kids, comprehensive schools failed them. I was lucky and got a decent eduction but most of my contemporaries did not.

Ken agreed that there were some very poor comprehensive schools were some teachers just gave up. But the problem was not that they were comprehensive but that its values were not fully implemented. There was also the economic crisis's of the 1970s and for many the education they got in a comprehensive was still better than they would have got beforehand.

He compared the criticism he use get as a member of the Communist Party because of the actions of the Soviet Union. People would ask him how could be a communist and he would counter by saying that the Soviet Union was never a socialist state. (I take his point but I am not totally convinced)

It was an excellent and well attended debate and when large CLPs moan about the lack of attendance at GC meetings then they should think of similar ways to encourage members to attend.