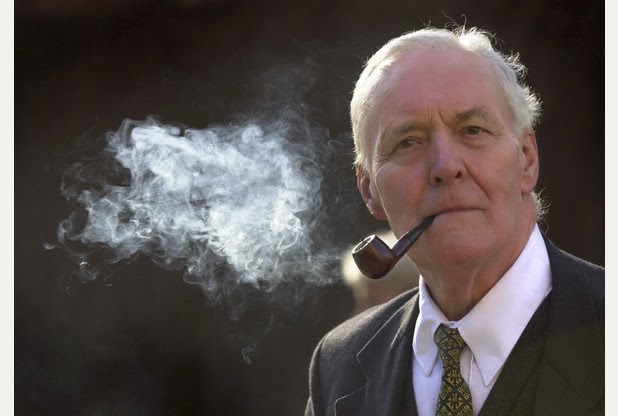 Maybe its because I'm getting older or more probably it is just chance but the last few weeks have been dominated by the deaths of what were to me - important Labour movement figures who helped shape my beliefs and politics.

Today Tony Benn died aged 88, which was not unexpected and who had reached a good age. On Tuesday Union leader Bob Crow who was only 52. The week before Stuart Barber also died unexpectedly. Stuart was a mate and a top UNISON regional officer in London. While last month, West Ham Labour Party lost one of its longest serving and most loyal members Gerry Carlile.

My social media today is dominated by tributes to Tony Benn. I first heard about it by text from a fellow Newham Councillor at 7.22 as I was about to go out and deliver Labour Party leaflets in my ward. "Morning Comrade. A sad day for all socialists with the passing of Tony Benn".

I love this iconic photograph above of Tony Benn. Like many Labour Party supporters I was never a supporter of most of his solutions but I agreed with his analysis of the problems and admired his courage in standing his ground, despite everything thrown at him.

As always in "This Great Movement Of Ours " (aka tigmoo) Labour movement family members will usually agree where we want to go but can't agree on the best way to get there.

I had the privilege to listen and even speak to Tony Benn on a number of occasions.

He spoke at the AGM of my  branch at the time, Tower Hamlets Local Government UNISON and happily chatted to us all beforehand while drinking a massive mug of tea.

At a SERTUC international meeting in 2007 he reminisced as being on a British troop ship sailing back to “Blighty” after the second world war. He was at the time a RAF pilot and Labour Party parliamentary candidate in the 1945 elections. He remembered the debates on board the troop ship about why was it possible to have full employment when the country was at war killing German’s but not in peacetime when they could be building hospitals and schools?

On a similar theme an UNISON national officer speaking at a branch meeting once recommended  Tony Benn’s simply definition of socialism. “If we have unemployed building workers and homeless people why don’t we get the unemployed to build homes for the homeless”.

I thought his arguments in favour of republicanism were unanswerable. He made it perfectly clear that he had nothing but respect for the present Royal family and especially their service in the second world war and thought it was a complete distraction to attack them personally. He just wanted and demanded as a democrat to have an elected Head of State.

I can remember him talking powerfully about taking a trip on a train in Thatcherite Britain. At the beginning of the journey everyone just sat in their seats, did not have any contact with their neighbours and read their books and newspapers. The train broke down and while the passengers were waiting for it to be fixed they started to talk to each other and share food and drinks. At the beginning the train was a Tory train, selfish and individualistic. When the train broke down it became a socialist train, collective and sharing in adversity.

I suspect that the second world war shaped Tony Benn as much as the first world war had affected Clement Attlee.

One of my favourite recent memories of him is sitting on a panel at a public debate in a hall at Tower Hamlets waiting to speak, happily puffing away on his pipe while sitting directly under a large sign saying "No smoking". No-one dared to ask him to stop.

A good UNISON comrade of mine went to see him speak last year at at a memorial celebration in Bow of the 1888 London Women Matchmakers Strike. Tony convinced him to join the Labour Party in his speech (which I had never been able to do).

My final favourite quote from him is this :-

“We are not just here to manage capitalism but to change society and to define its finer values.”
Posted by John Gray at Friday, March 14, 2014