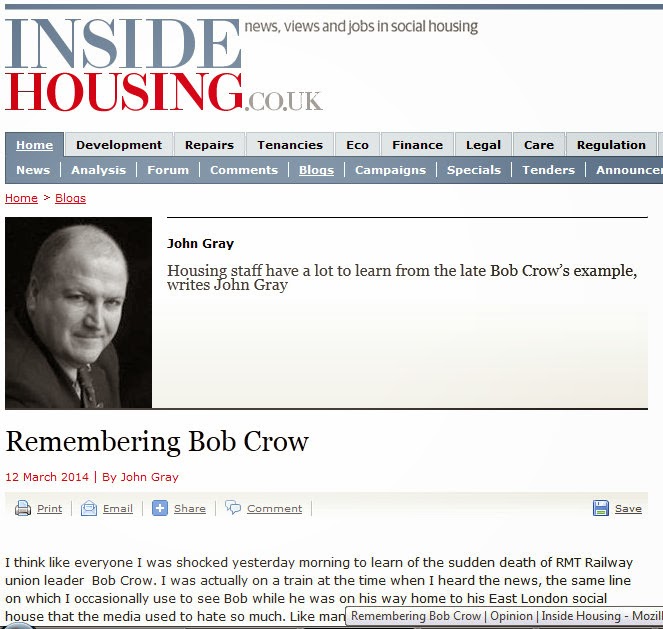 This is an article I wrote for Inside Housing

"I think like everyone I was shocked yesterday morning to learn of the sudden death of RMT Railway union leader  Bob Crow. I was actually on a train at the time when I heard the news, the same line on which I occasionally use to see Bob while he was on his way home to his East London social house that the media used to hate so much.

Like many trade unionists I was a huge admirer of what he was able to achieve for his members even though I didn’t always agree with everything he said.

Inside Housing has asked me what union housing representatives can learn from his example.

I think a huge amount.  I won’t pretend that unions in the housing sector have the industrial muscle and bargaining power that the rail unions have, since they have the ability to bring their industry very quickly to an absolute halt. There are at least three lasting interrelated legacies I think that Bob leaves to us.

First and foremost Bob believed that you must have a strong collective voice to stand up for your rights at work. The interests of the employer and the employees are not always the same and if you are passive and do nothing, then don’t be surprised if you get walked all over.  There is a massive power imbalance in the workplace and strong, independent and accountable trade unions are needed to tackle this imbalance and restore equilibrium.

The second legacy from Bob is union density. Bob knew what our grandmothers and grandfathers knew and has now been often sadly forgotten. It is very simple but true. The more of us in the union - the better the deal we will get. Bob drove up union density in the RMT and increased his bargaining power so all members benefited. It is indeed the case that workers are ‘Better Together’.

The third legacy to housing unions is what I would call adopting the Bob Crow mind set. That housing workers must be prepared to fight and take industrial action if necessary. Industrial action can take many forms but you must consider the ultimate weapon of strike action. It is no use just complaining about cuts in your salary or pension, reductions in sick pay or unfair redundancies. All of us must be prepared to stand up and do something about it.

Never forget you cannot depend on employment law or your employer to protect you at work. You can only depend on your fellow workers and your union.

Last night I was at a Unison regional meeting representing housing workers and it was proposed that we send the RMT and his family our condolences and we should hold a minutes silence for Bob.  I suggested that a minutes silence would not be apt for Bob and that instead we should all stand up together and make passionate speeches for a minute instead. We decided to send condolences.
John Gray is a housing officer and Unison committee member"
Posted by John Gray at Wednesday, March 12, 2014

He will be deeply missed by all trade Unionist, we have so few people like him and now we have one great leader less.

What a shame so young.

Agreed but our movement needs more activists and not more great leaders, even if they are like him.

I think Bob would have agreed.

John, you keep going on about equality. So why is is my taxes are paying for Bob Crow's council house?

People like me earn far less then him, but have to pay for his council house. How is that fair?

Labour go on about supporting the poor, but it is proof Labour are no different to the fat cat bankers.

Bob Crow was earning £145,000, he should have had the decency to give up his council house for someone on the council waiting list.

He may be paying rent, but it is a fraction of the market rent or people's mortgages. At the very least he should pay the market rate, to off-set someone renting privately.

Did Bob Crow do anything for the travelling public?. Look at the Tube, we have the most expensive Tube fare in the world.

Depending on how old you are and how old Bob's "council" home is then you may have not contributed anything to it.

It is absolutely vital that social housing is not just for those on benefits - we need mixed communities.

I do support the idea of those who can should pay more. Maybe all those on higher rate tax should pay an actual cost rent rather than a social rent?

If you charge the market rate you would force out even those on higher rate tax.

The real problem is lack of rent controls and grossly inadequate housing supply not one trade union leader choosing to remain in his home.

You have the most expense railways in Britain because of private profit and that other countries choose to subsidise their railways more than we do in UK.

"Depending on how old you are and how old Bob's "council" home is then you may have not contributed anything to it. "

I might not have paid for Bob's council house, but I am paying for someone else to get a house in the Olympic park, because Bob Crow has taken it up.

"It is absolutely vital that social housing is not just for those on benefits - we need mixed communities."

Your ideas about mixed communities, are right on paper, they do not work in the real world.

Local Space bought up private houses all they managed to do is put the worst people in there. All the original owners moved out. A few months, ago, your Local Space tenants were throwing bottled glass.

"You have the most expense railways in Britain because of private profit and that other countries choose to subsidise their railways more than we do in UK."

You've moved your goalpost here - so would you have supported him buying his council house and pocketing the subsidy?

You are also being selective. Why should I as a basic rate taxpayer be subsiding higher rate tax payers earning up to £80k per year to buy Boris shared ownership schemes?

No all "local space tenants" throw bottles. That is just being silly.