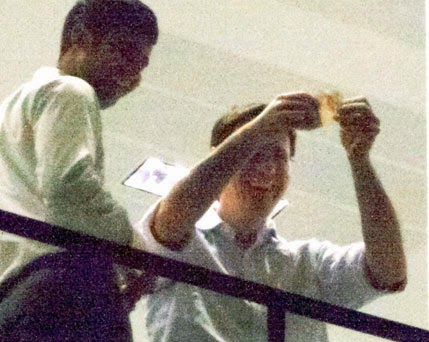 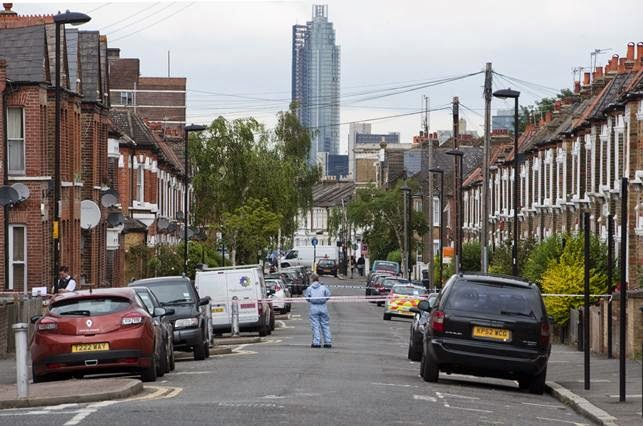 This is a tale of two Cities. On the right there is a picture of London investment bankers jeering and taunting "Save our NHS" protesters with bank notes who were in the street below.

While left is a picture from the crime scene in Lambeth last year when 3 Housing Association workers and a Court official were shot at and 2 seriously wounded while carrying out their duties.

This was my contribution to our branch annual report as Branch Secretary.

Their London is now feeling the full blast of austerity.  They have to deal with the real life consequences of the bedroom tax, benefit caps, massive rents increases and coalition cuts.  At the same time suffering yet another year of either pay reductions or below average pay awards (or in some cases – both).

In their London overcrowding and homelessness grows. We see more and more dependent on food banks for basic survival.

Our London Housing workers have seen attacks on their employment conditions and safety. They  have to pay huge tribunal fees if they are bullied or treated unfairly at work.  TUPE protection is under further attack.

Yet there is another City also called London. This is a London of the rich and the powerful. Of millionaires who now pay less tax than those who clean their offices. Of financiers who by their recklessness and fraud brought about this recession.   We have executives in our own sector whose mates decide how much they earn and who can earn more in a year than our London low paid members earn in a life time. Who have lucrative bonuses, 12 month severance packages and luxury status cars.

The first step to challenge this tale of two cities is via your union. UNISON is already by far the largest union in our sectors but we must grow. We must organise new stewards and recruit more members. We must get more recognition agreements and facility time. We must train stewards and activists, hold regular shop meetings, communicate and listen to our members and work with residents. We need to re-balance power in the workplace in order to get a better deal.

The next step is political. There will be elections in London and Europe next year. The year after that there will be a General election. For the first time in a generation housing, in nearly all its forms seems to be near the top of the political agenda. People are worried about the cost of living but also  what will happen to their elderly relatives as well as their sons and daughters who cannot afford to leave home. While scandals in schemes run by poorly paid and trained staff such as Winterbourne are I think also beginning to change attitudes.

2014 will see more yet misery for our residents, clients and our members but it can also be the beginning of the end of Two Cities called London".
Posted by John Gray at Thursday, March 27, 2014

I believe the note waving Deutsche Bank employee was suspended but don't know what happened to him.

He was lucky if he wasn't charged with a public order offence.