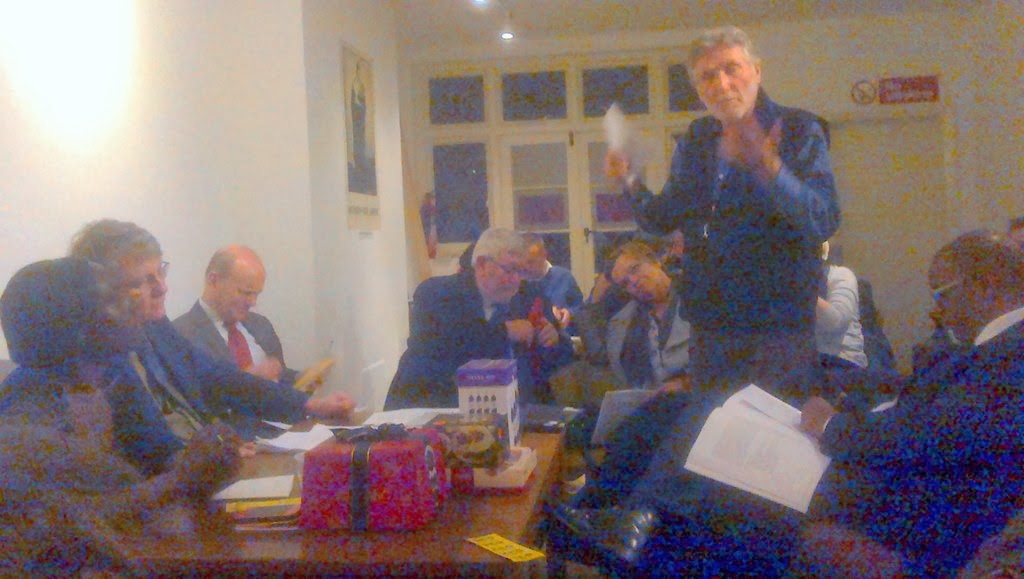 I'm on my way to the Labour Party Special Conference in London from Brighton and have some time to reflect upon the debate we had on Thursday evening on the Collins Review at West Ham Labour Party General Committee.

We had existing policy opposing the initial proposals on reforming the relationship of the Party with the trade unions. This was the last chance for us to let our CLP delegate ,Terry Paul, know our views in light of the latest review (I am going there as a UNISON delegate)

The debate was actually more about London Primaries and the raising of the threshold for MP's to nominate a Party leader than on the future relationship with trade unions. I think that most members knew that the affiliated trade unions were on the whole supporting the proposals.  Yet there was a concern that this would damage the link with the unions.

I told the meeting that I thought that classic compromise had been hammered out which has got to work. While I am a supporter of the principle of collective affiliation, trade union members actively choosing to opt in and pay a levy to the Labour Party (which is the UNISON model) should finally end the lie about so called "union barons" controlling the Labour Party (if only).

If the proposal go through then the unions and the Party have got to use this opportunity to not only persuade train unions members to pay their £3 per year affiliation but also to get them, their friends and family to join the Party and participate.

We need to do because there is a massive disconnect in our politics. The working class in this Country have traditionally bought themselves political power and economic/social benefits by the ballot box. Many working people don't "get this" anymore. We need to get people to understand that if they want increases in pay, more homes, secure employment and save the NHS then they not only have to vote Labour but also take part and participate. The Party itself is in desperate need of new activists who are rooted in their community.

The issue of Labour Party "supporters" was debated and some members thought it was simply wrong that those who paid their full membership were in effect being disenfranchised in the London selection process for Mayor.  There was also a fear that the process will be dominated by the media. While one member argued that the Party outside London is basically dying with less than 200 in each CLP. We need new blood and new ways of attracting support.

Another member complained about the failure in the Collins report to reform the Labour Party NEC since there was still only 2 on the Executive from Labour Councillors despite them being the largest financial contributors to the Party outside the unions.

The raising of the bar for MP nominations for leader was attacked because it would make it very difficult for women and BME candidates and not give the wider Party a real political choice.

There was a proposal that the Collin Review should be taken in parts which was agreed at the meeting. Yet in the vote on a London Primary for selection for London Mayor it was passed overwhelmingly. While by a narrow majority so was the proposal for the raising of the threshold for nominating a Party leader. Since there are no apparently no rule changes at the special conference regarding the trade union link we didn't have any formal vote.

Picture of long standing Party member John Saunders giving us the benefit of his views! London Labour Assembly member and Tower Hamlets Mayoral candidate, who is to left of picture, spoke to us next which I hope to post upon soon.
Posted by John Gray at Saturday, March 01, 2014

I suspect it will die a death and the next think will be state funding and then the Conference vote. labour is heading for a change of name to the Progress party.
We all know why this change to the Union voting went forward it was the least mess made by Miliband and Progress, the statement Miliband made about Unions and the fix that was put forward.

The labour party is at the moment running on band wagons Electricity gas power band wagon,

Labour is back in the dark old ages again.

I think you are wrong and this is now an opportunity for the affiliated unions to realise that waving cheques at the Party is not enough.

We have to talk to our members and persuade them it is in their interests to join and participate in the Party.

There is frankly no alternative to this. Either you sit on your hands and just moan and groan how imperfect the Party is or you get involved and change it.

its either that or a Conservative majority government in 2015. No choice really.