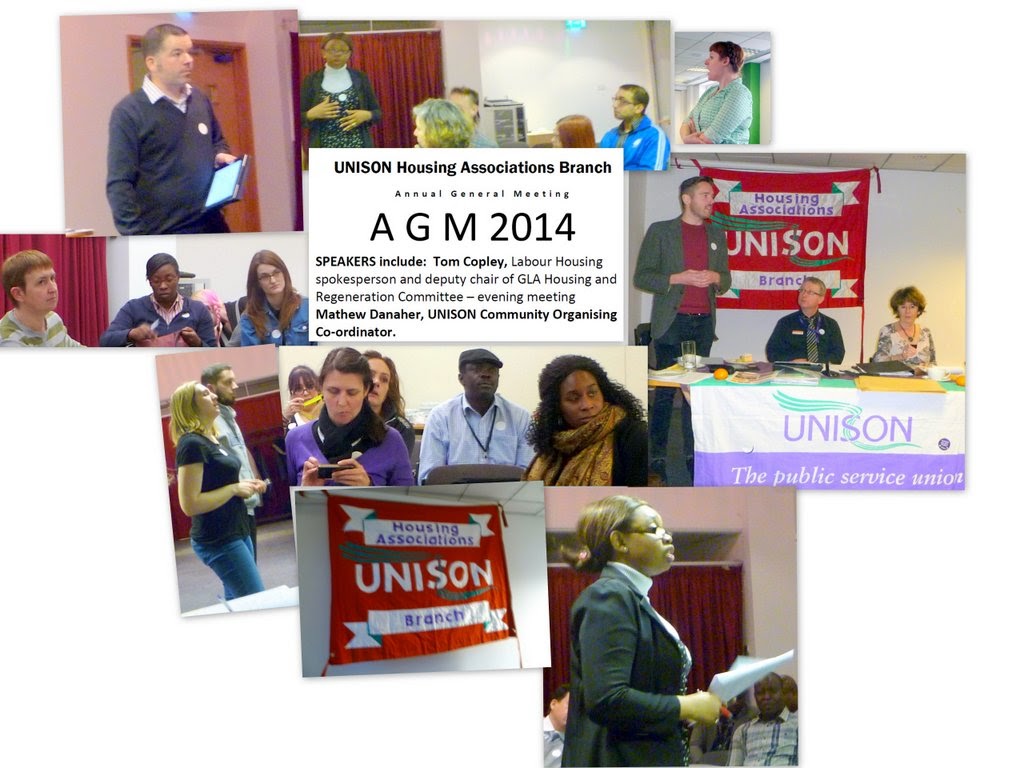 On Tuesday we held our branch Annual General Meeting at the Resource Centre in Islington.  In order to encourage participation there were two separate meetings. One in the afternoon and the other in the evening.

Some interesting statistics in our annual report - we have over 3000 members in 146 different organisations and 879 workplaces.  66% of members are female while 46% are BME.

We did all the usual boring but important AGM stuff such as approving the annual report, the accounts and branch affiliations. We had no contested elections for branch officers, so I was elected unopposed again as Branch Secretary and Labour Link officer.

We passed 4 motions to send to UNISON National Delegate Conference on - Wages Councils; Save our Co-op; Racism in Greece and democracy in Egypt. There was some good comradely debates on whether it was too late or not to save the Co-op (we thought it was not too late) and the best way to support trade unionists in Egypt.

UNISON National officer Mathew Danaher spoke on organising tenants, clients and worker solidarity. We all have so much in common and we need to work together. Matthew finished by talking about what UNISON is doing about Credit Unions. We need to invite him back to give training to reps on this.

Our keynote speaker was Labour London Assembly member and deputy Chair of the GLA Housing Committee, Tom Copley. He spoke about the need to massively boost housing supply and control rents in London. Tom is very obviously "up to speed" on housing issues in London and I think we will look forward to working with him in the future.

We promised to give him further information on the massive cuts in wages and terms to low paid social care and support staff badly affected by the race to the bottom in "supporting people" budgets.

At the end of the meeting we had an update by members on a pay and recognition dispute with a well known London employer, which we hope can be resolved but may end up in a fight. There was also a bucket collection for SOAS cleaners in their dispute for fair terms and conditions.

I think this was a pretty successful AGM, no huge rows, we were quorate and we now have the probably the largest Executive Committee elected that we have ever had in recent years

Afterwards many of us went next door to the Weatherspoons for a welcome rest and recuperation.
Posted by John Gray at Sunday, March 23, 2014