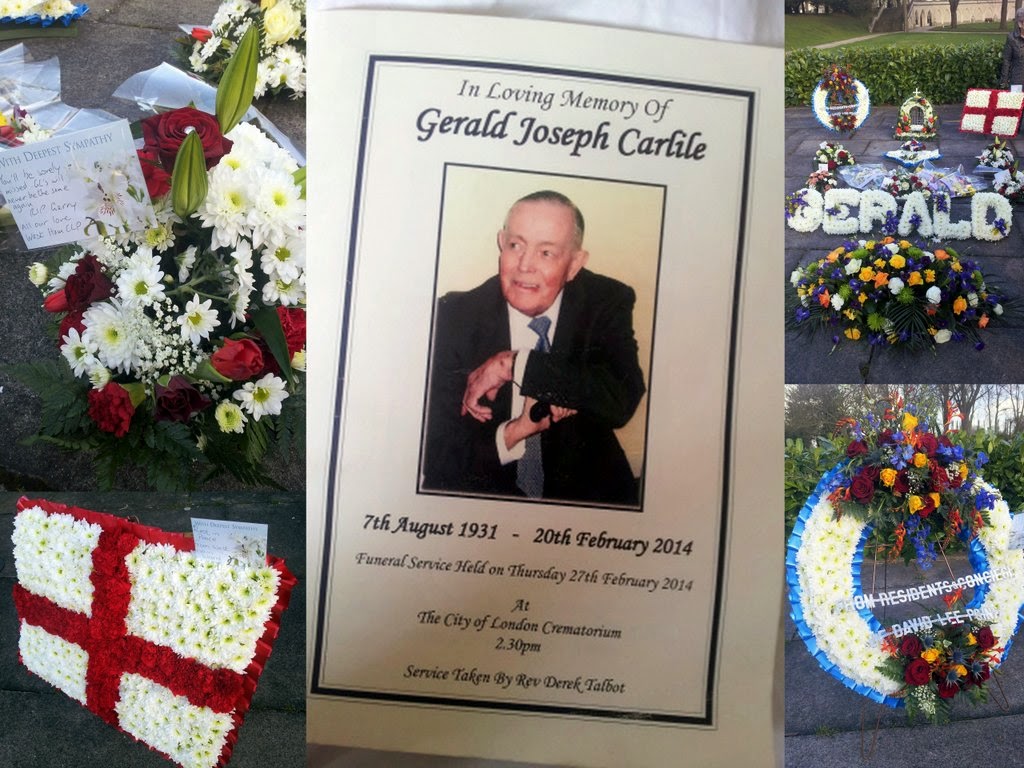 This is my tribute.

"Last month on the 27 February family and friends remembered and celebrated the long life of Gerald Joseph Carlile at City of London crematorium in Manor Park.

Gerry was born in West Ham in 1931 and apart from National Service in Gibraltar, he lived here all his life.

He was the second youngest of a close knit family of 8 children. Gerry worked for most of his life in Blackwell Power station. When he was there he had to physically shovel coal into the furnaces that powered the electric generators. A hard, hot and dirty job.

Gerry was also a life long member of the Transport and General Workers Union (now Unite) and the Labour Party. He served on a number of union national committees and was an admirer and supporter of its former general secretary, Spanish Civil War International Brigade hero, Jack Jones.

Gerry was a tenant activist who refused on principle to buy his Council flat. He served as West Ham Labour Party disability officer and held numerous other ward and CLP positions.

Gerry was a Socialist who was proud to be British. His coffin was drapped in the Union Jack. He was proud of his Country although he wanted it to change and be fairer. To better look after the vulnerable and especially the elderly and disabled.

He honoured the memory of his older brother John who was killed in action in the Second World War when his ship was sunk by a Nazi submarine.

Like many East Enders he was a staunch supporter of the Royal family. The only time he and I ever had a real falling out was when I happened to mention that I was a republican, for which he made very clear his views and what he thought of those who didn't share them! But afterwards he never  mentioned this again.

At the service the eulogy was read by Gerry's friend and near neighbour for over 40 years, Cllr Ron Manley.

The final piece of music in the service was of course "God Save the Queen".

Afterwards we went to a excellent buffet and refreshments at the Railway Tavern pub in Stratford.

Many thanks to his family for organising such a wonderful service and T. Cribbs & Sons the funeral Directors and Rev Derek Talbot. Donations to Cancer Research.

Hat tip to Julianne for the photos and her tribute on West Ham Labour blog.
Posted by John Gray at Thursday, March 20, 2014