London Labour Europe team "on the knocker" in Canning town. 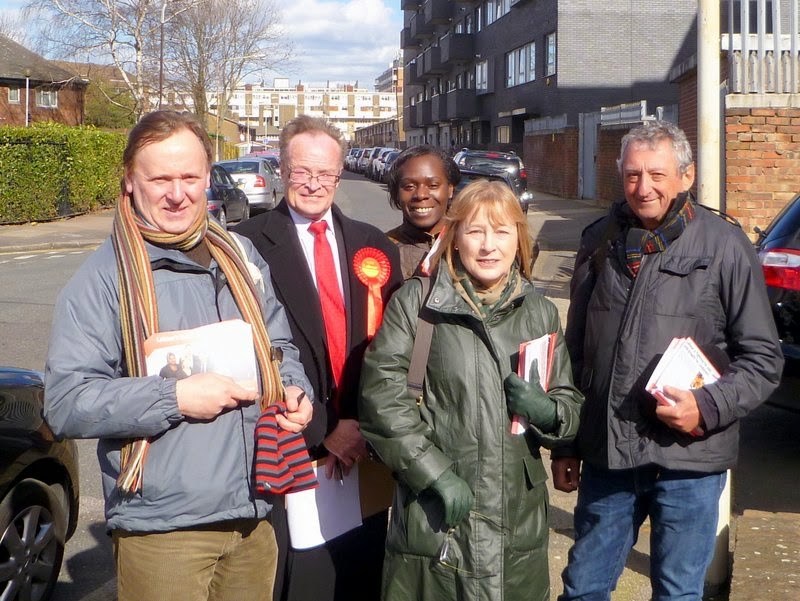 On Saturday afternoon the Labour Candidates for the May Euro elections came to help out in West Ham CLP. In the morning they had been in East Ham.

We were in Canning Town ward and went door knocking around Ordnance Road. This area has changed in recent years but is still pretty solid Labour.There use to be a BNP presence in the past but this has largely long gone.

The area seemed to be well maintained. Mainly Council built flats and houses with some modern developments. There was not to be absolutely honest a huge interest in the Euro elections but residents I met seemed really pleased to meet one of their London Member's European Parliament.

I had been canvassing in the morning in West Ham ward on local issues but it was interesting to be out with Mary and seeing things from a more European campaign prospect. I was hoping to have a debate with residents on Europe but apart from one very grumpy resident who just said he hated the lot of us, the issues were the same bread and butter problems such as street cleaning, rubbish, dog mess and housing waiting lists.

As a trade unionist I think it is vital that Labour does well in the Euro-elections.  The EU is in a mess and there are huge governance problems but Social Europe helps protect ordinary workers in this country and if the ultra Tory UKIP had their way, British workers would have no rights, what so ever in this country.
Posted by John Gray at Monday, March 24, 2014