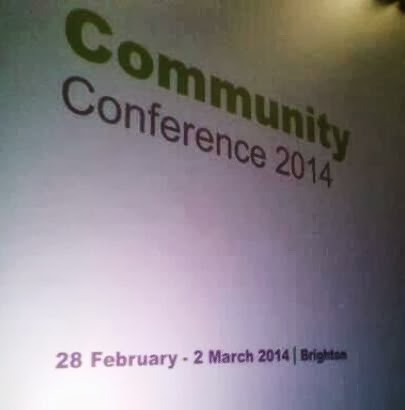 This afternoon was the start of the UNISON Community (Housing Associations and Voluntary sector) Annual Seminar and Conference 2014.

Our key note speaker was Karen Jennings, the Assistant General Secretary who spoke about UNISON's strategy for the future - recruitment,organising and campaigning. We have over 60k members in our Community service group, which she pointed out was more than many national professional organisations.

Karen explained about the UNISON "Worth it" Campaign". When we talk to members and potential members we have to use their language not that of activists.  We need to increase our members self belief and self esteem.

"Worth it" reveals how people across UK are struggling: how to make the case against austerity and how many of our members are the working poor who simple cannot pay their bills.  At the moment we are mobilising to support the TUC Fair Pay Fortnight. 22 March to 6 April.

UNISON has also in the last year started a huge advertising campaign with adverts in national newspapers, TV and radio. It has shown to be particularly effective during children programmes. Parents join UNISON on the phone while their children watch cartoons.

Finally Karen reminded everyone that the cuts had not fully happened yet. 400k jobs have gone in public service but there are 750k to come.  Labour only has a slim lead in the polls so any one who wants Labour to win cannot be complaisant. UNISON is targeting106 marginal seats with Tory majorities less than unison membership in the area.

UNISON was unhappy about many things last the last Labour government did but we need a message of hope. We recognise the very important statements from Andy Burnham and Ed Miliband to abolish the bedroom tax, the Health & Social Care Act, unfair zero hour contracts and support a living wage.  We need more detail.

UNISON members in large numbers voted for Tories and Lib Dems in last election. Our task is to ask members to think again about what will happen if the Tories get in - we need to speak to our members . Get a postal vote since it is easier to vote if you have 2 jobs.

Labour doesn't have the money that Tories have but they can win if people volunteer their time to knock on doors.
Posted by John Gray at Friday, February 28, 2014