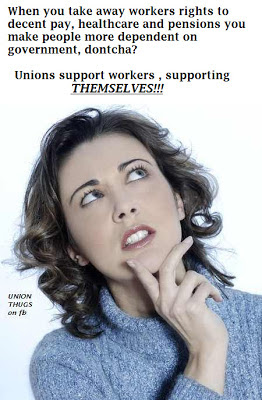 I think that eventually the penny will drop. Due to the decline in trade unions bargaining power wages, benefits and pensions for the majority of working people are now lower. This has indeed led to higher government spending  and taxation to keep them out of desperate poverty.

Note that the vast amount of this spending was on supporting families in work who needed tax credits and housing benefits.

To make things worse, the decline in wages led to increase in household debt as workers made up for their reduced spending power to top up their pay on the "never, never".

I am constantly told by financial experts that the real problem for the British Economy is not our national government debt (which is relatively low compared to the past) but our high domestic debt.

Now that access to debt is restricted the decline in real wages has resulted in reduced demand. So we face  - decades of recession.

How do we increase demand and drag this country out of recession??? How do we reverse low pay?

When will the tax evaders alliance demand greater rights for trade unions to reduce dependancy on the state? :)