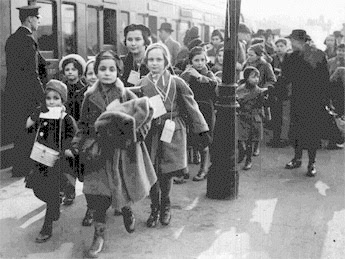 Today (27 January) is Holocaust Memorial Day.  This date is the anniversary of the liberation of Auschwitz concentration camp in 1945.

On Friday morning I was travelling through Liverpool Street Railway station and the statutes of the "Kindertransport" children next to the main ticket office, reminded me of the 9,500 children who were allowed to flee Germany before the Second World War and live in Britain.

Many of them arrived in Liverpool Street station from Harwich. The vast majority would have died in German concentration camps if they had not been able to flee. Many never saw their parents again.

While 80% of the children were Jewish, the rest were children of anti-fascists who also knew what would happen to their children if they did not escape.

Newham Council and the Mayor, Sir Robin Wales, held an event on Friday morning to unite communities and reflect on the horrors of Nazi atrocities.

On Saturday I received through the post, the latest edition of UK anti-fascist magazine, Searchlight.  Reading in the magazine the accounts of current fascist activity in the UK, you must be amazed and sickened, that there are still Nazi's in our country, such as the those in the BNP, who think there is nothing wrong with mass murder and turning dead bodies into lamp shades and soap.
Posted by John Gray at Sunday, January 27, 2013

20,000,000 russians died in the ww2, 3,500,000 pows in concentration camps. are these to be forgotten by tghis silly blog which is always oin the bandwagon, to be frank no one gives a shit bout lp views anymore, they have proved themselves to be as hollow and shallow as the cons

I'm afraid that you are as ignorant of history as you of making a coherent argument.

ok tell me where my history is wrong

The Germans and their allies in the 2nd World War committed many crimes and atrocities but any attempt to minimise the attempt to murder an entire race to make cheap political digs is in my book despicable.

you are a total example of a throw back to tony blair, a person most likely thinking on the same lines as career opportunist blair, save breath you wont make it mate, why cant you understand that the german nazis, not the german people (thats racist) wanted to destroy all slavs just as much as jews, and you want to represent us workers, jog on!!!!!please!!!!

anyone reading thios blog should asak how this person thinks he could ever represent us workers in any way, not just silly but arrogant with it, but then thats the only kind of people in the lp today, no one with bounce and intelligence is in it

The Labour Party can do without apologists for mass murder and ethnic cleansing thank you very much.