Save Our Pensions (Do you want to be Old and Cold?) 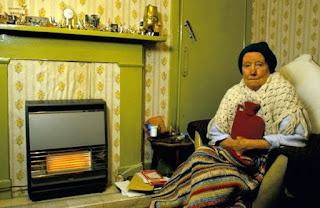 This is one of my branch motions to the UNISON Community conference in March 2013. Which was amended at the last weekends Service Group Executive meeting at York (see last point).

That the Social Housing Pension Fund and the Pension Trust have announced plans to stop many Community employers from offering a decent defined benefit scheme to our members.

They are also trying to massively increase pension contributions to such an extent that many employers are planning to close schemes to future service or pass on these contribution rises onto members. This will make them unaffordable and members will be forced to leave the schemes which will in turn then fail.

The reasons given for taking this action by SHPS and the Pension Trust are that they must protect the fund against rising “pension liabilities”. This is a completely nonsensical argument. It is well known that due to outdated and deficient rules called “Mark to Market” accounting, the “costs” of defined benefit pensions have risen in a totally artificial manner. Schemes usually have to price their costs according to the return on Government loans called gilts. Due to the abnormal economic conditions these gilts currently have negative returns and are at a 200 year all time low. This has meant that pension schemes appear to have high deficits when in fact this has nothing to do with their underlying strengths or weaknesses.

The government has committed to act on this issue but has just failed to do so. The Pension minister Steve Webb promised to do something about what he called this "nightmare" which is "killing" perfectly good pension schemes and that he would "not idly stand by" and let this happen.

Properly run and regulated defined benefit pension schemes are as affordable today as they have ever been. Most defined contributions schemes will not result in members getting adequate benefits when they retire. Our members will die in poverty and the taxpayers will have to subsidise bad employers for their poverty pensions.

Auto enrolling of pension is an organising opportunity for the union as well as a means to fight for better pension provision. .

This Conference calls upon the Service Group Executive:-

To lead a campaign to save our pension schemes from closure. To encourage our employers to stand up to the Pension Trust and SHPS and make them understand that they do not have to destroy peoples pension futures to safe guard the scheme. To also reopen existing closed schemes.

To lead a campaign to ensure that if employers do not stand up to the Pension Trust and SHPS then they should pay the extra contributions which the schemes are unreasonably asking for and not staff.

To lobby the Pension Trust and SHPS to modernise their schemes. For example why does the better off pay less (after higher rate tax) in pension contributions then basic rate taxpayers?

To lobby the Government to change “Mark to Market” accounting.

To examine the case for employers to be encouraged to seek alternative defined benefit provision in our sector and what role the Labour movement can play in this provision. In many other countries trade unions provide pensions.

To consider how to organise effectively around auto-enrolment in our sector and ensure that any defined contribution schemes match NAPF Quality standards plus".

"To campaign for all Community employers and pension providers currently proposing to close their defined benefit schemes or raise contributions, to suspend changes following the announcement by the Chancellor George Osborne in the Autumn Statement of a government enquiry into new ways of valuing pension fund deficits. Some commentators believe this could lead to a reduction in deficits by up to 40%".
Posted by John Gray at Thursday, January 17, 2013