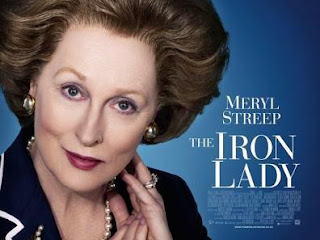 I watched tonight for the first time the film "The Iron Lady" which is about the life of former Tory Prime Minister, Margaret Thatcher.

It was an historical drama and not a documentary. While I would certainly not agree with all the political interpretations it made, I enjoyed watching it.

Thatcher today is very much still a divisive  figure: a hero to some and a hate figure to others.

Under Margaret Thatcher, male unemployment in my part of North East Wales, following closures in the local Steel works and textile factories reached 33%. It was an horrendous time and she seemed to give the impression as PM that she didn't care and just a price worth paying!

So I should really hate her, but I have always preferred to dislike rather than hate. The key thing in politics is to attack what politicians do and say rather than their personalities.

Forgetting the politics (if you can) I was pretty uncomfortable with the scenes in the film around her current  supposed mental health and the involvement of her children, grown up or otherwise. It was more than a bit off I thought and it was simply wrong in my view of the film to bring this up.

The actual acting by Meryl Streep was simply superb and incredible. She was Margaret Thatcher.

As regards to any lessons we can learn from this film for the "left"? Well, yes there is. We all know that there are many working class Tories such as Thatcher and we cannot just ignore them and pretend they do not exist.  It is no use just knocking people who share these beliefs we have to find ways to win them over.

The real lesson from the film is that the "left" needs to learn from Thatcher (of all people) that if you have real self-belief and self-confidence in your arguments it is possible to succeed and bring about fundamental change.
Posted by John Gray at Sunday, January 06, 2013

Thatcher was a fantastic Prime Minister. She got this country by the scruff of the neck, dragged it of its knees and made it great again. She did n't get everything right.... Her cuts to hospitals went too far. Selling off of council housing was a mistake (although her heart was in the right place). She wanted to liberate the poor. She wanted everyone to do well in and pull themselves up.


It was a time when inflation was running at 13% and the unions had cripped the country. Low inflation is something we take for granted.

We are a very different country now. If she was running the country, she would not have allowed casino style banking. She would have let the banks fail (in a true free market economy). Thats the lesson Labour never taught the city. She would have got Fred Goodwin and hung him up by the short and curlies.

It is interesting some of the things she said about socialism are still true today.

>>> Having seen with my own eyes, trouble makers from housing associations....

(2) I came to office with one deliberate intent: to change Britain from a dependent to a self-reliant society — from a give-it-to-me, to a do-it-yourself nation. A get-up-and-go, instead of a sit-back-and-wait-for-it Britain.


(3) Thatcher "The trouble with socialism is, eventually you run out of other people's money."

(4) Socialists cry "Power to the people", and raise the clenched fist as they say it. We all know what they really mean—power over people, power to the State.

(5) My policies are based not on some economics theory, but on things I and millions like me were brought up with: an honest day’s work for an honest day’s pay; live within your means; put by a nest egg for a rainy day; pay your bills on time; support the police.

(6) A man may climb Everest for himself, but at the summit he plants his country’s flag.

(7) There can be no liberty unless there is economic liberty.

(8) Imagine a Labour canvasser talking on the doorstep to those East German families when they settle in on freedom’s side of the wall. “You want to keep more of the money you earn? I’m afraid that’s very selfish. We shall want to tax that away. You want to own shares in your firm? We can’t have that. The state has to own your firm. You want to choose where to send your children to school? That’s very divisive. You’ll send your child where we tell you.”

So what did she actually do then? Inflation was high under Thatcher and only brought under control by her successors.

She might have hand bagged Godwin but she would have never left the banks to go bust. No one is that silly, even her.

The real problem with Thatcher is that she had a closed mind, was a fanatic, a fundamentalist, a bigot who could see no way but her way.

Such fanaticism has no place in British politics.

Its more than a bit ironic that she eventually stabbed in the back by her own people.