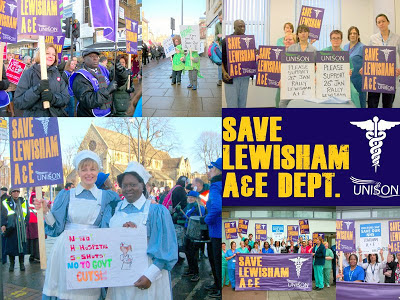 "This has been a historic demonstration with of over 25,000, representing a total cross section of our community, surely this cannot be ignored by this Government, a Government who stated in their manifesto they would ensure "no forced closure of A&E Departments"

UNISON Lewisham Hospital nurse and branch secretary Mike Davy stated "If they can get away with closing Lewisham Hospital A&E, not because it is "failing", not on "clinical grounds" but to bail out a Private Finance Initiative (PFI) deal in another hospital, they can effectively close any A&E department in the country"

"David Cameron once threatened a bare knuckle fight over Hospital A&E closures, but where is he now ?".
Posted by John Gray at Monday, January 28, 2013

In my view no existing taxpayer funded asset/facility should be abandoned/modified without permission of the taxpaying citizens of Lewisham. It is right and equitable that you take control of what you paid for and continue to benefit from the facility.