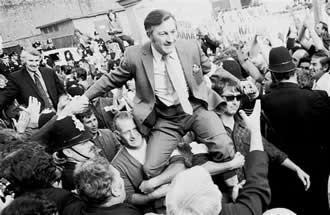 Vic was born in Custom House, Newham and lived in the area all his life. He was the youngest from a family of 7 and was told to join the union the day he started work at the local docks with his father and brothers. He became a member of the Transport & General Union and the Communist Party.

Vic is seen in photo being carried by supporters after being released from Pentonville Jail in 1972. He and 4 other dockers had been jailed for ignoring a court order to stop "illegal" picketing at a container site in Chobham Farm in Newham (now I think part of the Stratford Olympic site).

The Tory government of the time led by Edward Heath had been forced to release them from prison due to the threat of an effective general strike by trade unions led by the TUC.  This was rightly a huge victory at the time for the trade union movement. The Tories did unfortunately learn from their defeat in future battles with the unions.

After being made redundant from the docks, Vic worked for Newham Council and later become a Newham Labour Councillor from 1994 to 2006. He had the reputation of a hardworking and dedicated Councillor. In 1997/98 he was the Mayor.

I only met Vic the once (I think) many years ago and at the time I was not really aware of who he was so I wasted the opportunity to have a proper chat with him about 1972 for a now forgotten conversation. My loss.

Vic's funeral I understand will be on January 18 and will take place at City of London Cemetery and Crematorium in Manor Park.

UPDATE: Vic Turner's funeral will take place at 2.45 pm on Friday, 18 January, at the City of London Cemetery and Crematorium.

The reception after Vic's funeral will be at the "Princess Alexandra" pub, 219 Barking Road, E16 4HH - between Canning Town flyover and  the The Abbey Arms, Plaistow.
Posted by John Gray at Saturday, January 05, 2013

Is he the chap that was ousted by Robin Wales?

Vic Turner was a smashing man, who served his community, either as a trade unionist in the docks or in local government and afterwards as a local politician. He also had an unassuming graciousness. He stuck by his word. The world, and Newham in particular, is the poorer for his passing. They don't make them like him any more.

They certainty don't. I have not heard one bad word about him.