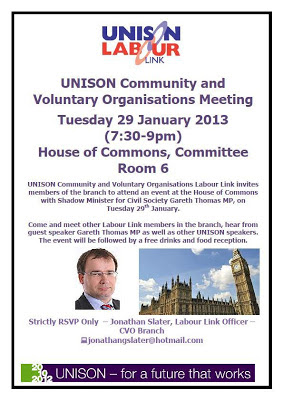 UNISON Greater London Community and Voluntary Organisations (CVO) branch are holding a meeting in the House of Commons with Shadow minister of Civic Society Gareth Thomas MP on Tuesday 29 January 2013.

I am also speaking at the meeting as the Chair of Regional Labour Link.

Afterwards there will be a reception at a local hospitality (Pub!).

The CVO Labour Link Officer, Jonathan Slater, is organising the event. Attendance is for UNISON Labour Link members and strictly by invite only.

Jonathon has opened the invitation to all UNISON Housing Association Labour Link members and I will be sending out an invite to them tomorrow.

We may also be holding a Parliamentary lobby for UNISON member's on another issue earlier that day. Details to follow.

Many thanks for Jonathan for organising what what looks like to be an interesting event. Labour Link officers   in all branches should think about organising something similar. We need to get our ordinary members, who are bearing the brunt of the attacks against not only their pay but the the services they provide, to tell their story to their local MPs.
Posted by John Gray at Monday, January 07, 2013