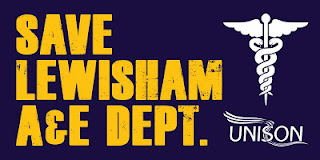 "UNISON the UK’s largest union, is calling on the public to join a march this Saturday (26 Jan), to show their support for Lewisham Hospital’s A & E Department.

Lewisham’s A & E facility is pencilled in for closure as a result of a massive over spend in nearby South London Healthcare Trust's hospitals.

The closure plan is in spite of pre-election pledges by the Conservatives to “stop all forced hospital A&E departments”.

The union is expecting a massive turn-out, with local team Millwall FC postponing a match kick-off to accommodate expected attendance.

The march will take place on:
Saturday 26 January From Lewisham Train station
Starting at 12.00pm

“We are urging local people to come out on Saturday and show their support for this much-valued A & E Department. Everyone has a stake in this protest and we’re expecting a massive attendance with placards from every section of Lewisham including churches, pensioner groups, schools, nurseries and workplaces”.

“We would urge the Secretary of State for Health, Jeremy Hunt, to watch the events on Saturday in Lewisham closely, to listen to what the people of Lewisham are saying, and to study the detailed opposition to the closure proposals put forward by all sections of the medical and nursing profession”.

“It is a credit to hospital staff that they are working as normal providing a professional service despite the threat to this hospital. NHS Administrator Mr Kershaw has ignored the 90% of respondents to the consultation on the hospitals future but Jeremy Hunt should not ignore the deep concerns of the medical and nursing professions and from the public”.

“Lewisham hospital is currently taking on extra patients from hospitals including Queen Elizabeth Hospital (Woolwich) and Princess Royal University Hospital (Farnborough) such is the pressure on acute services in South London. There is no way that this closure will not have a devastating impact on local people.”

UNISON has received reports that patients from nearby A&E departments are already experiencing long delays and patients are being diverted to Lewisham Hospital.

These closures are driven not on clinical grounds but on massive reductions in NHS funding, exacerbated by the disastrous Private Finance Initiative which has bankrupted so many hospitals".

WELL done Unison i was there saturday, UNISON were the only Union to show up [and show up they did, they more like landed, massive balloons to boot] strange that other unions [er unite] bang on, attempt to dictate to others what to do, all the while have no members in Health, and cant muster any troops come the fight, as for the rcn the least said the better, once again when needed Unison members rock up in numbers,

Great show by unison and supporters at march.