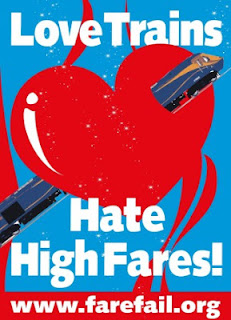 "Kick off Valentine’s Day with our action for low fares.

On 2 January, rail fares soared above inflation for the tenth year running. They have increased almost three times faster than wages and are now 26% higher than they were before the recession. Is it any wonder we pay more than anywhere else in Europe? Our #FareFail campaign took to the streets and stations of Britain and thousands of commuters got involved to express their view. The actions also received great friendly national and local media coverage, and a very positive reaction from commuters, who took up thousands of our campaign postcards.

The government response was to turn a blind eye to rail passenger anger. Transport minister Norman Baker told us fares were “not nearly as expensive” as presented! On 9 January the government defeated a parliamentary motion opposing the fares increase.

Well, we don’t know about you, but we’ve had enough. If we want change we’ve got to keep the pressure up.

On 14 February, the international day of love, we’re going back to the travelling public with one simple message:

“Love Trains, Hate High Fares!”
And we need your help to do it.

And as it’s Valentine’s Day, why not pledge to bring a loved one with you too!
We can only stop the era of rip-off fares if we show those in charge how strongly we feel. Please get involved with the campaign today.

We want to be at as many railway stations as possible on the morning of 14 February, between 7.30 and 9.30am. If you can volunteer, register here:"
Posted by John Gray at Saturday, January 19, 2013