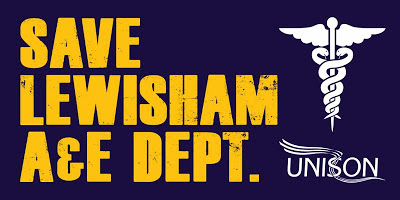 "UNISON expresses bitter disappointment that TSA Matthew Kershaw has chosen to ignore the unprecedented response to the recent consultation exercise in respect of his health proposals across Lewisham and the South London Healthcare Trust.

In doing so he disregards a number of compelling clinical arguments in favour of the retention of emergency and maternity services on the Lewisham site.

Whilst the political arguments are taken to the heart of government by our local Labour Party MPs, and the Secretary of State deliberates on the final decision, UNISON is urging all of its members to join in the march and rally on Saturday 26th January.

Come and march with your local UNISON branch and join with UNISON colleagues from across South London in demonstrating against the proposed down grading of our local emergency and maternity services.

The march will pass by the hospital and terminate in Mountsfield Park around 14.00, with live music and various speakers, including UNISON Greater London Deputy Regional Convenor (and Lewisham's very own) Conroy Lawrence.

Assemble under the UNISON Greater London Regional banner on the roundabout by Lewisham Station from 12.00 on Saturday 26th January.

In the meanwhile UNISON will be making a further submission to the Secretary of State drawing attention to the powerful arguments made in our consultation response previously submitted to Matthew Kershaw.

As others have already commented, we need to maximise turnout at this march and rally in order deliver a resounding statement to the Secretary of State before he makes his final decision.

Please make every effort to support this event and I look forward to joining with you all on the 26th".