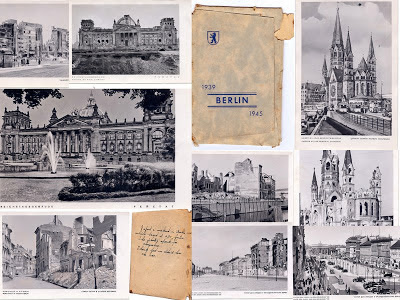 My late father (another John Gray) carried out his national service in the RAF in Germany 1947-1948 as a Aircraft Technician.

I picked up an envelope of postcards and photos he had collected during this time from my sister Lucy during the New Year holiday.

I had remembered that he had a set of postcards titled "1939 Berlin 1945". In this set were photos of prominent and historic buildings in Berlin before the War and after. As a child looking at these cards I can remember being horrified by the devastation.

My father wrote on the inside of the pack "I spent a weekend in Berlin while based at RAF Gatow. The photo's speak for themselves. Thank God we didn't lose the War".

(click on collage to bring up detail)
Posted by John Gray at Thursday, January 03, 2013