Myths and Misconceptions about Welfare 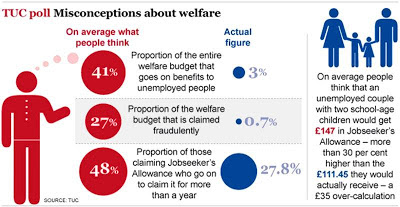 A very good report in the indie about voters being "brain washed by Tory Welfare myths".

I would go further and say these are not myths but deliberate lies and distortions being put out by this Tory led Government to justify ideological attacks on the most vulnerable.

Not only on the chronically sick and the unemployed but mostly the working poor who depend upon the state to top up their employer poverty wages.

Actual benefit fraudsters should be dealt with harshly as they are thieves and criminals. However, so should the many City and business thieves who in practise steal far more from the public purse, yet rarely end up facing the justice at the Criminal Courts they deserve.

"Dealt with harshly", might be a bit severe in some cases. The combination of low pay and inadequate benefit rates force many into the cash economy, just to survive. Tax loopholes for the rich allow those with means not to contribute financially to a fairer society, legally. Pay a fair living wage and close the loopholes, tax goes up - fraud goes down!

Yes and No, It's still theft and stealing from the State but I would expect a single parent struggling to bring up kids who fails to declare a part time cleaning job to be punished but not as much as a rich businessman who cheats out of greed.

Start jailing them then tax will go up and fraud will go down.