Myths about Public Spending under Labour 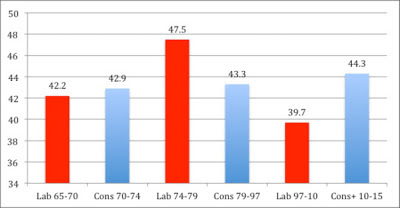 I like this post and chart in Red Brick by Steve Hilditch about actual public spending as percentage of GDP under Labour and Conservative Governments (as opposed to the myths).

With the exception of The Labour Government 1974-79, Tory Governments (including this one) have since 1965 spent more while in power than Labour ones. Even under Thatcher and Major.

The real question is did Labour spend too little in the last government?
Posted by John Gray at Tuesday, January 29, 2013

Your reference does not use any recognisable source for public spending figures (Total Managed Public Spending????).

The crucial figure here is government debt. There are some good graphics at http://pol-check.blogspot.co.uk/2011/05/worst-governments-since-first-world-war.html which give the actual public spending and debt figures.

Does public spending aid an economy? If you look at the history of the UK economy you can see that increasing the rate of public spending growth is always a bad idea. This effect is called Sydenham’s Law – see http://pol-check.blogspot.co.uk/2013/01/sydenhams-law-of-public-expenditure-and.html

Go thru the links and the source for the figures are Public Expenditure Statistical Analysis (PESA), published annually by HM Treasury.

In your 1st chart you reference it talks about changes in expenditure not the total?

While your "proofs" for the so called Sydenham's law have no references at all?

Sorry but am I missing something? you appear to have asserted things with no independent evidence?