SWP: Something is seriously rotten in the state of LaLa land 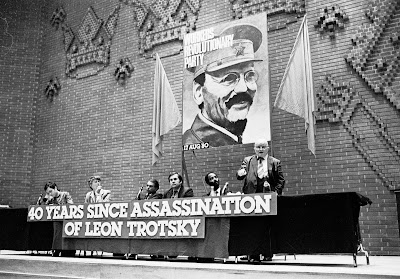 I think most folk know that I'm no friend of the Trotsky Revolutionary sect, the Socialist Workers Party (SWP), but the latest scandal they are embroiled in is just breath taking.

One of its junior female members made a complaint of rape against a longstanding member of its Central Executive Committee.

Instead of insisting that this member should report this very serious crime to the Police, they agreed that an internal "Disputes Committee" made up largely of friends and senior colleagues of the the alleged perpetrater  should "investigate" the complaint.  To no ones surprise they found (6-1) the case against "Comrade Delta" (a well known SWP Central Committee activist and reputed to be a violent thug) was "not proven".

Check out the report in "Socialist Unity" (who broke the story), "The Independent" and "Dave Osler" blog.

While I fully accept that the Police and the Crime Prosecution Service have in the past treated some rape victims shamefully and the Jimmy Saville debacle shows that powerful men can get away with a life of crime. I cannot for a second accept that an internal "investigation" by any organisation into such serious allegations is acceptable, never mind that the investigation panel comprised of mates and colleagues of the accused. How dare they think that they are better than an independent jury of 12 of your peers.

Is this a case of history repeating itself? In the picture above is Gerry Healy, the former leader of the Workers Revolutionary Party (WRP). Healey was eventually found to be a serial rapist and sexual abuser who for years was protected from accusations. The WRP collapsed after the discovery that its leader was a rapist and afterwards the SWP took its place as the "main" Trotsky sect in the UK.

Is there something in the essential DNA of these tiny ultra left sects and cults that make them prone to its leading men treating women as dirt?
Posted by John Gray at Sunday, January 13, 2013

Your a bit late to the gloating party gray.
I'd be a bit careful about glass houses and stones.

Yes swp behaviour appalling yet they couldn't have reported it to police without her permission that would have been outrageous.

We need to confront allegations and investigate them properly - it's a shame therefore that they are not in the case of a leading unison nec member who it's alleged has abused his wife. I understand the gmb are now helping his wife with the police case but unison are covering it up. Shameful

There is a problem with patriarchy and men treating woman as dirt it isn't specific to swp.

Leading lights in whatever organization can be predatory look at unison ex dgs Sonnet amongst many others would regularly use position of authority to get off with woman. That's an abuse of position and they shouldn't be allowed to cover it up.

Agree all allegations of rape should be reported to police - it's unclear if swp leant on the woman not to go ti police either way they will now be consigned to the dustbin of history.

Hardly gloating anon? A but late, yes, but once it hit the Daily Mail I thought I might as well report on it.

I suspect (but of course don't know) you are just making up your anonymous allegations to deflect attention. Which is a shame but to be expected I suppose.

You are right that there is a wider problem with men but when you have a cult like extremist organisation then the opportunity for abuse is that much greater.

BTW I didn't actually say that they should have reported her allegation to the Police without permission. It should however, had gone to the Police first.

what is that large picture of George Galloway doing there?

i have read the full script of the kangaroo court, SWP GROOM young girls for sex and to sell there papers, oh and give them drugs as well, i fear knacker of the yard will come knocking, any union member that deals with this shameful mob should hang there heads in shame,,,,,

Your logic is flawed you might as well ask the same question about the Roman Catholic Church. Not very seemly to gloat about rape - perhaps you would like more women in the parties you don't agree with to be raped so you can make capital out of it? I don't suppose your added publicity to this event has made the victim feel any better.

Of course you could ask the same question of the Catholic (and other) churches? At least they now seem to recognise the problem and say they have taken steps to stop abuse by not investigating internally and refusing to believe victims. The SWP so far hasn't.

It would appear that you would rather this alleged crime was in fact "covered up" and not come to light. How strange? A rapist charter.

They have their own agenda but interesting comments here http://www.counterfire.org/index.php/articles/analysis/16241-the-crisis-in-the-socialist-workers-party-and-the-future-of-the-left

...and you accuse me of gloating!

you are being too polite to the anonymous rape apologist.

The ultra left cults and sects have exactly the same mind set and personality disorders that you get in extremist religious groups.

They are no different.