Socialism and Patriotism in a time of crisis 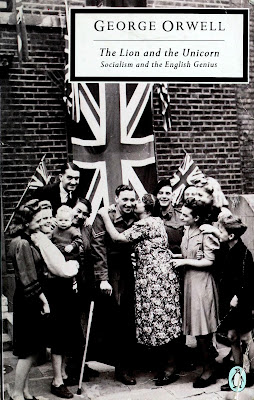 Recently the Labour Leader, Keir Starmer has faced some criticism following a leaked report recommending that the Party focuses on "flag and patriotism" to win back voters.

The former chair of the Fabians, Paul Richards has written a topical article (Socialism and Patriotism in a time of crisis" on the 80th anniversary of the war time pamphlet by George Orwell called "The Lion and the Unicorn - Socialism and the English Genius".

The famous opener of the pamphlet by Orwell is “As I write, highly civilised human beings are flying overhead, trying to kill me.”

While some of Orwell's work is dated and a product of his time, there is some telling points on Socialism and Patriotism

Richards quotes "Fyvel wrote that it ‘caught a patriotic English Socialist moment’. Through this frame, love of country could be commandeered in the service of progressive social change, something which Major Attlee and his ministers well understood after July 1945.

His publisher Fred Warburg said that Orwell’s jargon-free patriotic socialism made many recruits to the Labour party. By disentangling patriotism, a love for one’s country, from nationalism, a hatred for other people’s countries, Orwell showed how it can be a progressive force, and avoid the dead end of xenophobia".While I don't wholly agree with everything I recommend a read of this article (and "The Lion and the Unicorn" and all of Orwell's works)
Posted by John Gray at Sunday, February 07, 2021