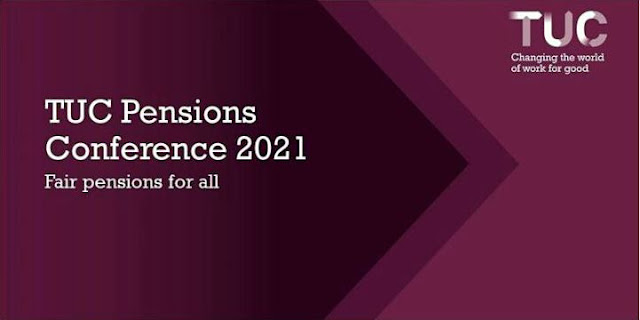 The TUC pensions conference brings together representatives from trade unions and the pension sector to debate the latest policy issues.

The full programme and sign up can be found here: https://www.eventbrite.co.uk/e/tuc-pensions-conference-fair-pensions-for-all-tickets-141667161293

This year's conference will be held online and will explore four key themes in a series of short webinars across four days:

Investing in a just transition

As investors, pension funds have a major role in the move to a low-carbon economy. So how can we make sure they use this position to ensure we have a just transition, with the workers and communities most affected at its heart?

Fixing the holes in auto-enrolment

Auto enrolment has brought millions of people into workplace pensions. But millions more are still excluded, and too many of those who are auto-enrolled are not building up enough pension to maintain living standards in retirement. This session will explore who's falling through the gaps, what impact Covid-19 has had, and how we can make sure auto-enrolment delivers decent pensions for all.

Making a success of collective DC

Thanks to the hard work of the Communication Workers Union, the Royal Mail is preparing to introduce the UK's first collective defined contribution pension scheme. By pooling investments and sharing risk, these arrangements can deliver more generous and stable retirement incomes than individual DC. So how can more employers be encouraged to offer CDC, and what can we learn from Canada, where unions have been involved in running this kind of scheme for decades?

Day 4: Rethinking the role of the state pension

The UK provides a significantly lower state pension than most comparable countries, and relies more heavily on occupational pensions to provide retirement incomes for its citizens. Our system is deeply ingrained and has its merits, but is it time to rethink this balance? Would a bigger role for the state pension reduce pensioner poverty and inequality?

- Jonathan Reynolds, shadow secretary of state for work and pensions