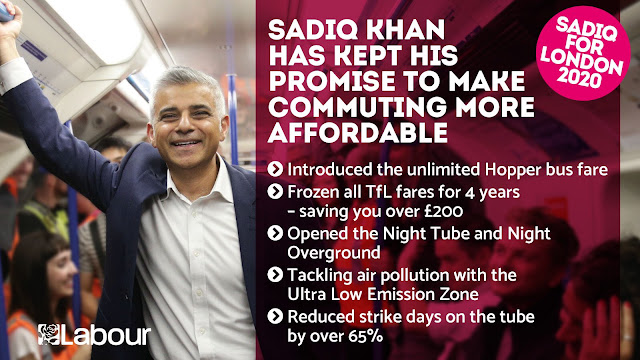 Another year, another election campaign. Just over 4 months until the Greater London Mayor and Assembly election. There will also be local Council elections in May (not London).

I thought he pledged to have "zero" strike days on public transport? But at least all the victim of crime during his tenure had low fares...
What was his record on rape, knife crime, homicides and theft?
Let's have some numbers John..because his record on crime is a complete disgrace.

Some numbers as requested

04 July 2018
Government cuts to policing have led officer numbers in London to drop to their lowest level per head in 20 years, City Hall data shows.

The number of police officers in London has fallen from 4.1 per thousand Londoners in 2010 to 3.3 per thousand this year.

At a time when violent crime is rising across the country, chronic underfunding has hit the Metropolitan Police hard, with the amount spent on policing per person falling 20 per cent in London between 2013 and 2017, compared to an average drop of 6 per cent across the country.

The Mayor is calling on the government to halt planned cuts to the Met immediately and invest properly in public services to combat the rise in violent crime:

“These figures released show the true scale of government cuts to police funding that have hit our city harder than anywhere else in the UK,” the Mayor said.

“I make no apologies for relentlessly pushing the government to understand that cuts have consequences and that our police service desperately need more funding right now,” he added.

What about air quality around London City Airport?

The Royal Docks stinks of jet fuel. The proposed river crossing, will had more traffic and turn everything from the Canning Town round to the A13 heading to Barking, into gridlock.

As for Policing, we tax payers has been paying for it at London City Airport..... They were supposed to contribute, but I don't know what has happened.

Good to see that you acknowledge that under Khan violent crime has surged beyond all recognition. Of course its predictably all someone else's fault and nothing to do with the Labour Mayor..

You are trolling anon. So the Met Commissioner is wrong then? Having fewer police equals more crime? The population of London has increased by 10% since 2010 but its Police budget is cut by £700 million?

Unfortunately after Gordon Brown's stint as PM the country was left bankrupt and seriously in debt. Everyone in the country knows this is a fact. The banks were administered by the FSA (set up under the auspices of Gordon Brown as chancellor) who were clearly asleep on the job. This mismanagement of the economy led directly to "austerity".. that was the origin of the cuts, or am I mistaken?... and before you bleat on about the bankers remember how many of them Blair and Brown knighted and feted.. "arise Sir Fred". of course if the country hadn't been dragged by Blair and Labour into the illegal Iraq war followed by Afghanistan we (and many other countries) would have been better off.

Now you are being silly. Everyone knows that across the western world, the banks went bonkers and nearly brought down capitalism. Gordon Brown helped save us from our retail banks going bust and cash points running out of money.

Yes, it was on his watch and he should bear responsibility but so should the tories, fund managers, media and all governments and international regulators.

This is actually an argument for John McDonnell style intervention and regulation of casino capitalism.

The great British electorate already passed their verdict on Chairman McDonnell and his economic vision..

'Everyone knows that across the western world, the banks went bonkers and nearly brought down capitalism. Gordon Brown helped save us from our retail banks going bust and cash points running out of money.'

You can't blame 'all' banks. You need to blame US banks. Read the Big Short by Michael Lewis. You can see it on Netflix, but not as great.

The problems was started by US banks. The sub-prime loans being sold as AAA loans.

Our banks were historically lending out money against the money held in savers bank account. Everything, changed when they banks had access to this extra money coming in from US markets, it were ballooning up houses prices in the UK. The boom benefited the UK economy, it paid for schools and hospitals. It was welcome after the tough Thatcher years. When people lost confidence in the financial markets. The banks had to borrow money from the Bank of England. Barclays borrowed money from the middle east. It was a loss of trust in the financial market.

I blame Gordon Brown in part. Although he had no way of knowing those American AAA loans were bad, but he should have asked questions about the ballooning debt. The out of control house prices. He also taxed pension dividends, forcing some companies to close their Defined Benefit pensions. People relying on buy to let for pensions.

'This is actually an argument for John McDonnell style intervention and regulation of casino capitalism.'

He wants councils to run businesses. Where has it been a success? London Please Gardens (I was impressed except for night time concerts idea), London Stadium, Newham Dockside?