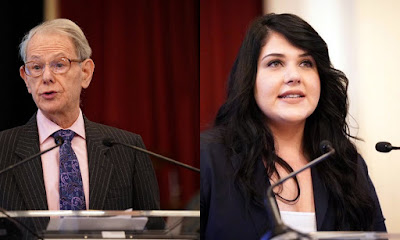 This morning I attended our annual Council event to honour Holocaust Memorial Day (held on 27 January which is the anniversary of the liberation of the Nazi death camp Auschwitz and today is the 75th anniversary) in the Old Town Hall in Stratford.

There was some really wonderful positive songs, musical recitals and poems by Newham children from various local schools.

But the first hand accounts of murder, racism and cruelty by survivors of very different genocide John Hajdu MBE and Arnesa Buljušmić-Kusturawere was so moving.

John Hajdu was a Hungarian Jew who as a small child had both of his parents sent to German concentration camps while he hid with an aunt in a ghetto. After surviving Nazi persecution he suffered further discrimination as a Jew from the post war communist dictatorship in Hungry and had to flee following the failed revolution in 1956.

While Arnesa was a Bosnian Muslim who Serb snipers tried to kill her when she was 6 and who lost many relatives in the genocidal mass shootings and concentration camps of that war.

I had to leave early but I came away very moved by the accounts of John and Arnesa and the beautiful songs and poetry by our young people but angry that our international political institutions did not ,after the horror of Auschwitz, prevent similar genocide in Bosnia nor also in Rwanda.