Who will be Labour's next leader? 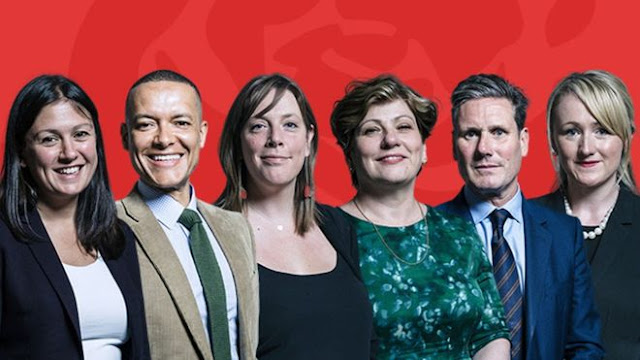 A good summary of declared and likely candidates for Labour Leadership on BBC here. There is still time for others to put their hat into the ring. I have not decided who to support but to be clear we have hundreds of thousands of families and children who are homeless, destitute and poverty stricken. We desperately need a Labour Government in power. It needs a leader who can unite the Party, hold Johnson to account until the next General Election and then win it. Nothing else really matters.

"Lisa Nandy
The 40-year-old MP for Wigan became the fourth Labour figure to declare she is standing for the leadership, in a letter to the Wigan Post. One of a clutch of shadow ministers who resigned from Jeremy Corbyn's frontbench after the Brexit referendum, she has been urging her party to concentrate on winning support in smaller towns.

Sir Keir Starmer
The 57-year old shadow Brexit secretary has said he is "seriously considering" running. He is likely to be seen as the centrist candidate in the race. A passionate Remainer, he was director of public prosecutions before entering Parliament.

Rebecca Long-Bailey
The 40-year old shadow business secretary is another MP to announce she is considering going for the top job. One of a new generation of MPs on the left of the party who is close to Mr Corbyn's inner circle, she represented Labour in a TV debate during the election.

Jess Philips
The 38-year-old Birmingham Yardley MP became the third Labour figure to declare she is standing for the leadership. She has been one of the most outspoken critics of Jeremy Corbyn's leadership and the party's record on tackling anti-Semitism, bullying and harassment.

Emily Thornberry
The 59-year old shadow foreign secretary was the first to declare she is running to succeed Mr Corbyn. She deputised for him at Prime Minister's Questions, but was replaced after publicly calling for Labour to back another EU referendum.

Yvette Cooper
The 50-year old, a former cabinet minister under Gordon Brown's premiership, said last month that she would "decide over Christmas" whether to stand, and has made no statement since then. She was an unsuccessful challenger to Jeremy Corbyn during the 2015 leadership contest.

Clive Lewis
The 48-year-old shadow Treasury minister resigned from the party's frontbench last year in order to oppose the bill triggering the Brexit process. An early supporter of Jeremy Corbyn, he rejoined in January last year".
Posted by John Gray at Saturday, January 04, 2020

Wow.. what a great line up of winners! All worthy candidates!!
Yes to .."SIR" Keir Starmer DPP, who changed the guidance to the police and overturned hundreds of years of legal precedent with his direction that police should put aside an'over-cautious approach' because of fears of false accusations. This resulted in the paedophile Nick debacle and the public humiliation of numerous outstanding figures whom had given years of service to public life. Yes to... "LADY" Nugee Thornberry with her impressive property portfolio...my mates at the Ford Transit Van club love her. They get my vote..!!

Yawn. You are trolling again. Please reference your whines about the son of a tool maker and nurse. BTW where you brought up in a Council estate anon?