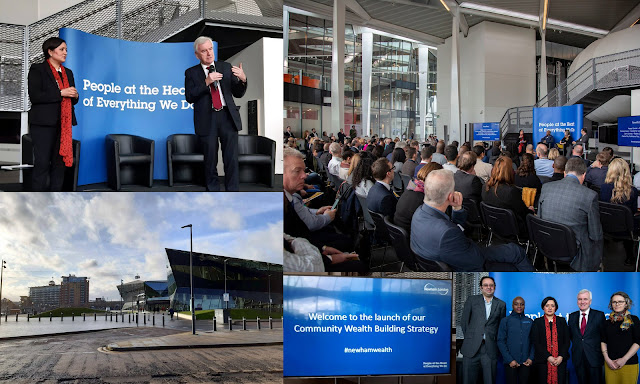 This morning we finally had the launch of the Newham Council Community Wealth Building (CWB) programme at The Crystal, Royal Docks.  We had to postpone it twice due to Brexit debate clashes and the General election.

Newham directly elected Mayor, Rokhsana Fiaz, opened the launch by promising that by implementing Community Wealth Building, there will be a new inclusive economic approach for a fairer Newham. We need to make sure that our money stays in Newham and is not extracted out.

After her introduction there was a marvellous, simple but clear video on what Community Wealth Building actually means (which I will post when it is made available).

Next was a panel debate with Happy Coman, an apprentice from local construction firm Morrisroe, Frances Jones from CLES ( a Community Wealth Building think tank) and Sam Gurney (London & South East TUC Regional Secretary). There was a wide range of views on CWB in practice.

Our keynote speaker was John McDonnell MP, Shadow Chancellor, who gave an insightful speech about CWB and also linked this to how progressive councils in the East End of London had a proud tradition of paying their workers decent wages and working in partnership with trade unions. He also made it clear that such councils and small, medium and large companies had been working together also in partnership for many decades.

It was nice to get a name check from Rokhsana and John about my personal involvement in the Labour Party Community Wealth Building unit (which I desperately hope will continue no matter who is elected as Labour leader).

After the event I was asked by a participant if I could I give an example of Newham Community Wealth Building in practice and I gave the live example of us bringing back into Newham Council (after 15 years) the privatised borough park keepers and gardeners on Tuesday this week.

Many of these workers enjoyed immediate pay rises, decent sick pay and pension provision as well as proper, secure employment contracts.  No longer will these workers be exploited and profits exported out of the borough to large multi-national outsourcing companies.

How many of those park keepers live in Newham?. How many spend their wages in Newham?

I don't know but since these gardeners are mainly low paid manual jobs I believe most live in Newham. When we ensured that care workers got the living wage most were living in Newham.